The British pundit and ex-footballer is locked in a row over the situation in the Middle East, where troops from the Israeli Defense Forces (IDF) are clashing with protesters. Lineker retweeted a video of small boys being detained and shoved around by police, before being locked in a small cage.

The original message was posted by human rights group B’Tselem after a number of journalists took to the streets to document the violence in Hebron in the illegally occupied West Bank, on October 13. In the clip, Israeli soldiers gather the boys up, pulling them around and locking their arms into painful positions.

The ‘Match of the Day’ presenter was immediately hounded for sharing the post, which he captioned “sickening.”

Ben White, a pro-Palestinian journalist and activist, was behind the footage, which was shared by the UK branch of Amnesty International. The human rights group requested social media users sign a petition urging the British government to ban trade with illegal Israeli settlements in the West Bank.

Former Israeli army spokesman Peter Lerner ranted at the ex-Tottenham Hotspur player. Lerner tweeted: “Sorry, Gary, you’ve completely missed the point. When kids throw stones they are a public menace. They need to be stopped. Yes, the video is unpleasant but it conveniently shares only a glimpse of what happened, the aftermath of their actions. You should be wiser than this. #Fail.” 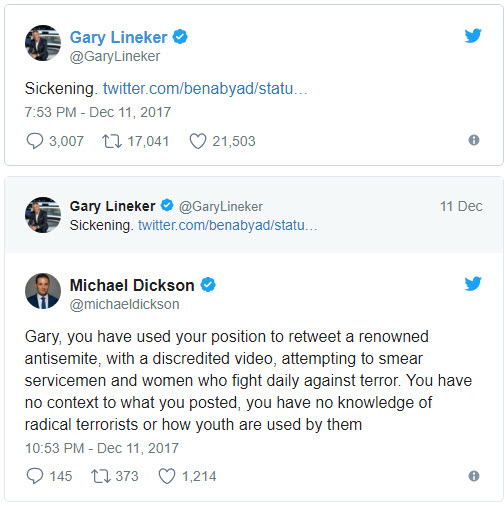 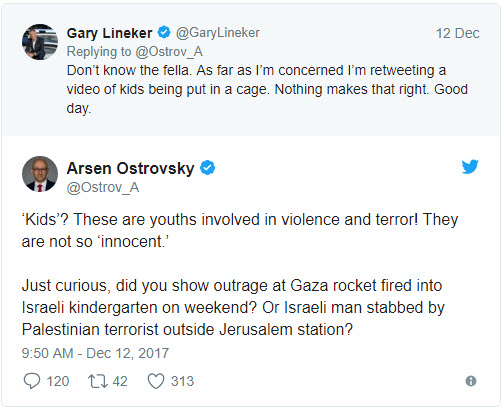 Lineker wasn’t going to be cowed, however.

“I stress I’m not taking sides, but locking a bunch of youngsters in a cage is wrong. I ask you in return do you think that is the right way to treat them? I’ve tweeted vehemently against fascism, bigotry, terrorism etc but you don’t seem as interested in those tweets.”

The bickering continued and Lineker said the children should be allowed “basic human rights” rather than being shoved into a cage.

Other Israelis made the same point as Lerner. One activist said: “Gary, you have used your position to retweet a renowned anti-Semite, with a discredited video, attempting to smear servicemen and women who fight daily against terror. You have no context to what you posted, you have no knowledge of radical terrorists or how youth are used by them.”

But Lineker also had plenty of support. One user wrote: “Gary no need to explain. Putting kids in cages is wrong. It’s as wrong as tear gassing Palestinian kids en route to school. I wouldn’t apologize for your views. We need to get those views out there. It’s never OK to treat kids the way IOF and the state does to Palestinian kids.”

Another said: “All respect to you mate. Freedom, justice, equality, peace. Kids in cages is always wrong, period. These kids are resisting tyranny!”

The Israel-Palestine conflict has flared up yet again after President Donald Trump announced the US will officially recognize Jerusalem as the capital of Israel. The disputed territory, where Jewish communities live in illegal encampments, has been at the center of the decades-old dispute.

Israelis welcomed the news, while other Middle East leaders insisted Trump had signed a “war declaration.”

The US will move its embassy to Jerusalem in the coming years. Britain has no plans to do so.