Skip to content
Home
/
2018
/
March
/
UK
/
Judgment Day: Putin’s midnight deadline has terminated, so what will Theresa May do next?
Facebook
Twitter
Google+
LinkedIn
Pinterest
Theresa May’s deadline for Moscow to explain why former double agent Sergei Skripal was poisoned with a Russian nerve agent on UK soil has passed. So what will happen next?

Russia has said it will not respond to the prime minister’s demand until it has a sample of the toxin and internationally-accepted procedure is followed in the investigation. The case must go through the proper channels of the Organization for the Prohibition of Chemical Weapons (OPCW), of which both Russia and the UK are members, Russia’s Foreign Minister Lavrov has said. The OPCW rules allow London to send a formal inquiry to Moscow, with a 10-day window for a reply.

RELATED: UK TV regulator writes to RT, says it may consider whether channel’s license is ‘fit and proper’

Russia has denied any involvement in the attempted murder of Skripal, 66, and his 33-year-old daughter Yulia in Salisbury. The two were found slumped on a bench in the town center on March 3, allegedly poisoned with a Soviet-engineered nerve agent called Novichok.

On Wednesday, May will be meeting senior intelligence chiefs in Downing Street. She is then expected to update MPs and make a formal announcement as to what Britain’s next steps will be.

Options floated to punish Russia include pulling England’s team from the upcoming World Cup, expelling diplomats, banning the issuing of visas to Russian citizens, freezing Russian financial assets in the UK, and revoking the television license for the RT TV network.

On Tuesday night, Number 10 said May had received the support of US President Donald Trump, who had previously seemed hesitant to throw his support behind either Russia or the UK. Trump agreed in a phone call with May that Moscow “must provide unambiguous answers as to how this nerve agent came to be used.”

POTUS is not the only one throwing his weight behind the UK. Closer to the Russian border, Baltic States like Estonia, Latvia and Lithuania have all backed May, offering to support the UK and condemning the attack on ex-spy Skripal. France’s President Emmanuel Macron and German Chancellor Angela Merkel have also got behind the UK PM.

Russia’s embassy to the UK posted a string of seven tweets saying it will not respond to London’s ultimatum without being given access to samples of the nerve agent. It also raised international obligations that require a joint investigation take place into the incident. 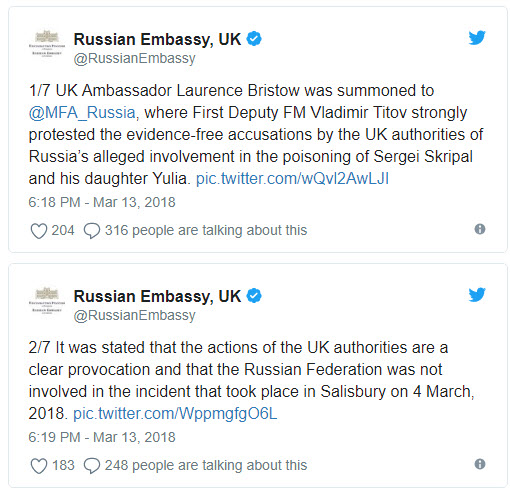 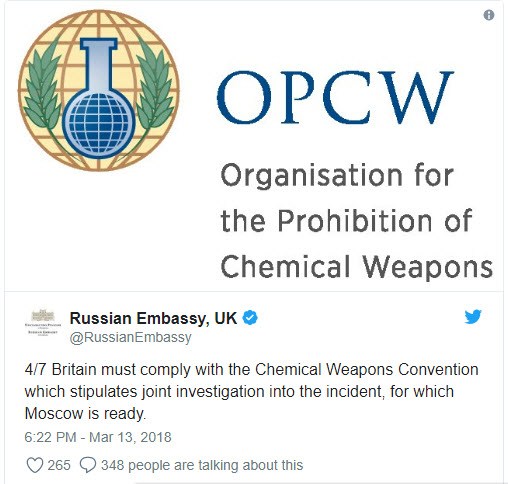 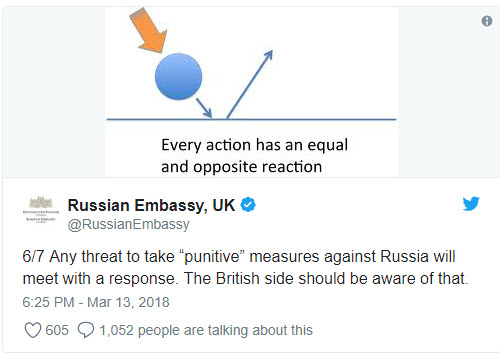