Skip to content
Home
/
2018
/
March
/
International
/
Moscow not accepting groundless threats & ultimatums, has nothing to do with Skripal case – Kremlin
Facebook
Twitter
Google+
LinkedIn
Pinterest
Russia has nothing to do with the alleged poisoning of Russian ex-double agent Sergei Skripal, the Kremlin said. Moscow will not accept any groundless threats or ultimatums, it added.

“Moscow’s position [on the Skripal case] is well known… Moscow had nothing to do with the incident that took place in the UK,” Kremlin spokesman Dmitry Peskov said on Tuesday.

Russia said it would not respond to the ultimatum set by UK Prime Minister Theresa May, who demanded an explanation for the “poisoning” of the 66-year-old Skripal and his daughter. May’s deadline expired on Wednesday at midnight. 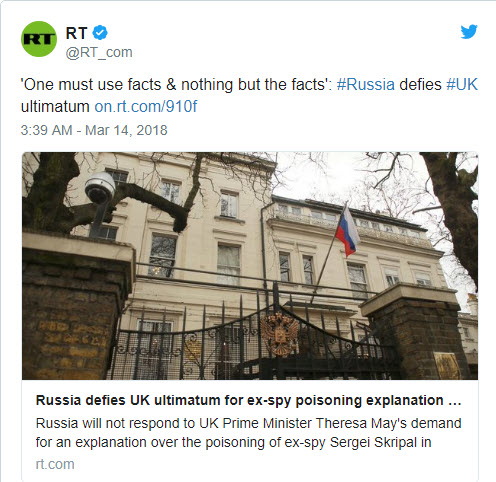 Peskov added that Moscow remains open for “cooperation in the investigation of the case.”
“Unfortunately, we haven’t been met with any reciprocity from the British side,” he concluded.

On Tuesday, Foreign Minister Sergey Lavrov called for an internationally accepted procedure in the case, and refused to respond to May’s ultimatum. “As soon as the rumors came up that the poisoning of Skripal involved a Russian-produced agent, which almost the entire English leadership has been fanning up, we sent an official request for access to this compound so that our experts could test it in accordance with the Chemical Weapons Convention [CWC],” he said at the time.