The family of journalist Jamal Khashoggi has declared ‘forgiveness’ for his killers, extending pardons to the accused, who faced execution in Saudi Arabia, as Muslims gear to celebrate the end of the holy month of Ramadan.

One of the Washington Post columnist’s two sons, Salah Khashoggi, announced amnesty for the murderers in a statement posted to Twitter on Thursday. Five men were sentenced to death in the case last year in a Saudi court, while three others were given 24 years in prison for their role in the murder plot. 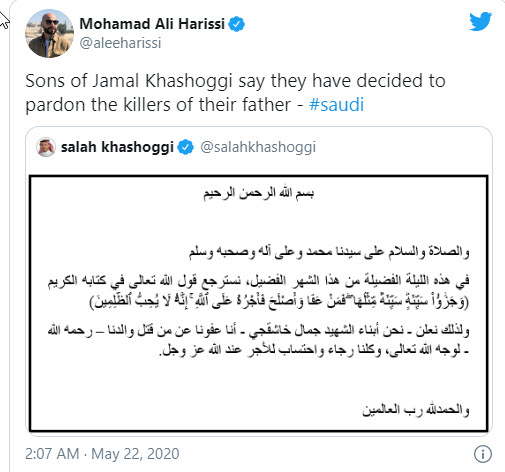 Under Saudi law, which is heavily influenced by Islamic legal traditions, the families of murder victims have the option to grant clemency to perpetrators, often in exchange for a monetary payment known as ‘diyah.’ Some convicts are spared without an exchange of money, however, and it’s unclear whether the Khashoggi family has requested any compensation.

“In this blessed night of the blessed month (of Ramadan) we remember God’s saying: If a person forgives and makes reconciliation, his reward is due from Allah,” the family wrote.

Therefore, we the sons of the Martyr’s Jamal Khashoggi announce pardoning those who killed our father, seeking reward God almighty.

While the Khashoggi family’s decision means that Saudi courts can no longer consider the possibility of capital punishment for the assassins, it does not automatically entail that they will be set free. The killers, sentenced to death, are still likely to face lengthy prison sentences.

The family of the journalist – who was an outspoken critic of Saudi royals before his grisly murder at Riyadh’s embassy in Istanbul in October 2018 – signalled in December that they would not oppose the verdicts handed out to those implicated in the case.

“We affirm our confidence in the Saudi judiciary at all levels,” Salah Khashoggi said at the time, describing the trial as a “fair” one.

The journalist’s demise made headlines all over the world, leading to massive international fallout which saw several European states impose bans on weapons sales to the kingdom. Although Washington decried the murder as well, US President Donald Trump fell short of mirroring the bans on arms sales or blaming Saudi Crown Prince Mohammad bin Salman for the murder.

The Crown Prince, commonly known as MBS, later took ‘full responsibility’ for the killing in a sense that it happened on his watch but denied that he ordered the assassination.