President Donald Trump has warned that an Iranian attack on US personnel would trigger a massive response, citing an anonymous-source-based report claiming the country is seeking revenge for the killing of a top general.

“According to press reports, Iran may be planning an assassination, or other attacks, against the United States in retaliation for the killing of terrorist leader Soleimani, which was carried out for his planning a future attack, murdering US Troops, and the death & suffering caused over so many years,” President Trump wrote in a tweet late on Monday night. 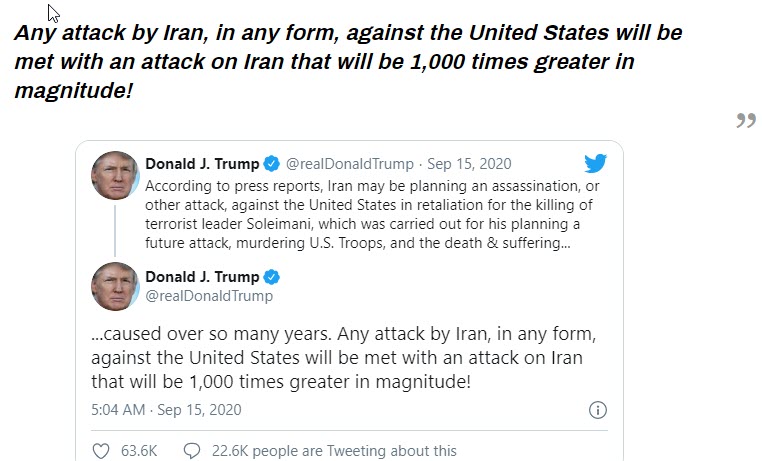 The comment comes less than 24 hours after a story in Politico alleged the Islamic Republic has been “weighing” a reprisal for the assassination of Qassem Soleimani, formerly the commander of Iran’s elite Quds Force, who was killed near the Baghdad International Airport by a US drone strike in January. The Politico piece was sourced to nameless US government officials, however, and Tehran has since rejected the claim, with Foreign Ministry spokesperson Saeed Khatibzadeh calling on Washington to “stop resorting to hackneyed and worn-out methods for anti-Iran propaganda in the international arena.”