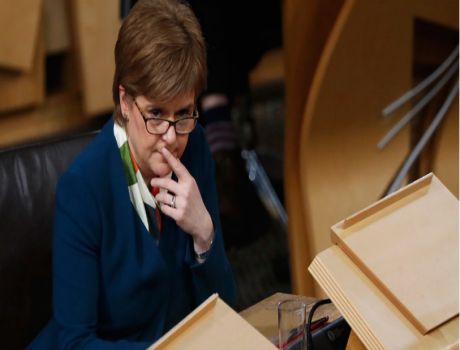 A petition to stop Scottish First Minister Nicola Sturgeon from calling another independence referendum had already garnered more than 50,000 signatures by Tuesday afternoon.

The petition calls on Westminster to block Sturgeon from triggering a repeat of the 2014 vote as it claims Scotland is “suffering hugely” from the leader’s focus on getting independence.

Sturgeon announced on Monday she will be calling for a second independence referendum between autumn 2018 and spring 2019 as she claims Westminster’s plan to go for a ‘hard Brexit’ will “damage the economy and change the very nature of our society and country.”

As 62 percent of Scottish voters cast ballots to stay in the EU, the first minister said she has a duty to stand up for Scotland’s interests. She said she would seek approval in the Scottish parliament next week for another referendum and secure the country’s future membership of the EU.

She claimed it would give the Scottish people the chance to have a say on their destiny.

“Whatever path we take, it should be one decided by us, not for us,” Sturgeon said.

The Scottish National Party (SNP) leader is determined to go through with the referendum after Prime Minister Theresa May’s announcement that the country will no longer retain access to the EU’s single market post-Brexit, one of Sturgeon’s key requests.

While saying she had genuinely tried to negotiate with Westminster over the terms of Brexit, Sturgeon claimed the PM had failed to move “an inch in pursuit of compromise or agreement,” and that compromise had been met by a “brick wall of intransigence.”

The first minister needs government consent to trigger another referendum.

Although she did not entirely reject the idea, May yesterday derided the proposal for another independence vote, suggesting it will only cause “more uncertainty and division,” and that Scotland has more important things to focus on instead.

“The tunnel vision that the SNP has shown today is deeply regrettable. It sets Scotland on a course for more uncertainty and division, creating huge uncertainty,” the PM said.

“Instead of playing politics with the future of our country the Scottish government should focus on delivering good government and public services for the people of Scotland. Politics is not a game.”

Her view echoes that of Scottish Conservative leader Ruth Davidson, who accused Sturgeon of ignoring Scotland’s will and “doubling down to division and uncertainty.”

“People have said time and again they do not want to go back to the division of a second referendum.

“Nicola Sturgeon promised the 2014 referendum would be ‘once in a generation,’” the BBC reported Davidson saying.

“Today she has ignored the majority in Scotland who do not want a referendum and has decided instead to double down on division and uncertainty.”