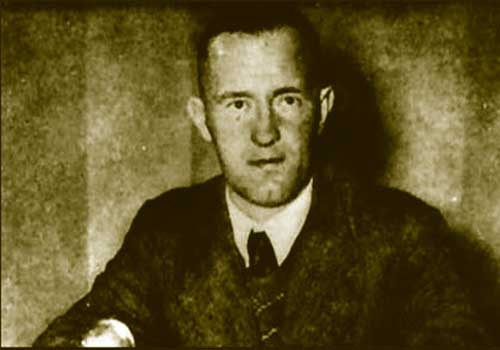 I refer kindly to your excellent piece in the December 12, 2016 edition reviewing the book on ‘Lord Haw Haw’ namely William Joyce written by Colin Holmes, which you can read below by clicking on insert.

Prior to my current circumstances, I represented the daughter of William Joyce who authorized and instructed me to review her father’s case and I came across material that had not previously been available either to the Courts and, of course, the public.

The evidence that sustains, that far from Joyce being a ‘traitor,’ I filed an application to review the conviction with the Criminal Cases Review Commission. Unfortunately, in 2013 I entered myself the criminal justice system and was unable to complete the Joyce case.

Far from Joyce being a traitor and covertly examining the files held at the SIS on Joyce, I found that Joyce was an agent working for Ml5 and his trip to Germany was, in fact, not only known to the British but sponsored by them. As you know Joyce never met Hitler and never even was greeted by Dr Goebbels which is in itself strange for someone who supposedly worked for the Nazi cause.

ALL the radio broadcasts contained coded messages to the British telling them vital information that saved many lives. In fact it was the very reason why the Government ALWAYS allowed his broadcasts and never once used jamming devices available. It was heavily reliant on Joyce’s messages and he as I said, and submitted to the CCRC, at all times was a British agent running a terrible risk if discovered.

When he returned to the United Kingdom he was visited by Ml5 and told not to concern himself and that he would be acquitted and return to normal life. Amongst the file I even discovered the so called original passport that was the cause of his conviction.

There are substantial and detailed submissions containing all of the above and even his own daughter whilst suspicious at the ease of her father travelling to Germany, was not aware of her father being a ‘double agent.’

Just before, I was able to file further submissions in March 2013, I was jailed but that did not prevent me from maintaining the information I had collected, albeit the SIS files in a covert manner.

If the British public and legal system (who were manipulated by the then Government) really seek the truth then the CCRC should open its file on my application for his conviction to be reviewed and exhibits.

A Freedom of Information Act 2000 request can be made. I do believe that there was considerable media on my application in 2012 and that they may be on Google.

I am not sure if the British public really does want to know the truth, or if the DM would be permitted to publish my submissions which are all backed with detailed facts but my friend Caroline Bayford I am sure has the file she can be contacted via contactopcglobal@gmail.com or my son Michael Di Stefano has a copy kept safe.

As William Joyce said: ‘My sacrifice will not be in vain.’ He was betrayed by the British Government for reasons that are evident in my submissions, the CCRC and his conviction was the most shameful political act in the British Courts since the conviction of Charles l.

I hope the above will be of help to you. Please send my kind regards and best Xmas wishes to all my friends at the DM.