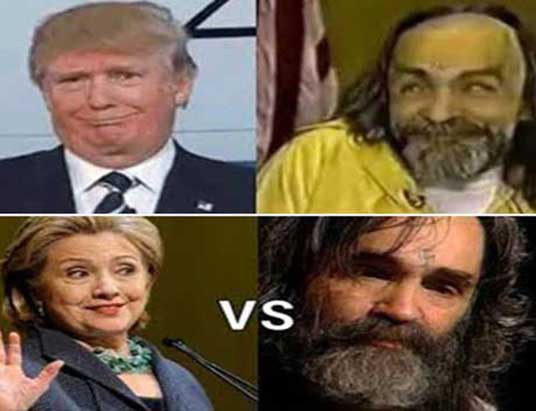 Matriarch -vs- Patriarch
By Grandfather  & Grandson Productions
It is purely an American phenomenon, that almost every United States President, since 1969, and President Nixon has had either something infinitesimal or something infinite to do with the convicted criminal Charles Manson in one way or the other.  More so during every election year since 1969, the public and press are aliken, to want; to will; to know . . .  What Would Charlie Do?
It’s voting time in America again, let’s ask Manson . . .

Didn’t President, number 37, Richard Milhous Nixon declare Manson guilty, and then go on himself to become the most disgraced 66DRUG WAR99 President in all of U.S. History?

Didn’t President, number 39 Jimmy Carter’s brother say about his stay with Charles Manson in the nut-house, “I really like him . . . Charlie Manson is my friend.  A lot of Christian people write me and say I should have salvation and that Jesus will cleanse me of my sins.  As far as I’m concerned the person who talks to me, that helps me get rid of my guilt, the only person that’s ever talked to me about that and given me any understanding is Charlie.”

Next, President, number 40, Ronald Reagan and first son Ronald Reagan Jr. who, both have something infinite to do with Charles Manson as well.  I think we see some patterns here?  While Nixon, was the 1st dominant President of Television; Reagan was the 1st Hollywood Actor to become a United States President.  And, it has been said that the so called ‘Manson Family’ actually did have – Ronald Reagan Senior’s gun in possession – while those ‘in the know’, all know; that Junior, did one of, if not the best of, all mass-money-minded – medias, reporters, interviews, ever with the Manson!
Charles Manson’s letter to President Ronald Reagan, concerning the “War On Drugs” bill:

Now since President, number 41, George Bush Sr., has no immediate Google web presence, at a glance, to find associated with Charlie, we’ll just chalk that one up to them, ‘Masters of the U.S. intelligence agencies,’ since Senior was the boss of all that jazz before he became a President.

And then we have the number 42 President Clinton’s; beginning between the Bush’s.

A link to Billy:

A link to Hillery:

And/or mayhap I got that all backass-words, links to: Hillbillies in the bushes?

Which leads us back to another junior, President, number 43, George Bush Jr., who, Charles Manson’s own New York Times bestselling Author/Prosecutor, Vincent Bug, wanted, ‘Charged for Murder’?  Is that true?

And, so, now, last but not least, the current African American President, number 44, Barack Hussein Obama, for all of the next few days of this year of our Lord 2016 November 5th until election November 8th (but not technically) wonders.  “What Would Charlie Do?”  This is where it all gets even trickier.  Pay attention.  There is really nothing easy to find that says Obama didn’t, doesn’t or, don’t, like Manson while there is plenty to find that says Manson don’t like Obama, or any of them for all of the above for that matter.

Ignoring all of that, and considering this, there is still at this late date a document on the table of President Obama’s White Houses tables, asking for the release, pardon or retrial of Charles Manson.  It was filed by an International Attorney, Giovanni Di Stefano,  who happened to have been clearly justified in representing Saddam Hussein yet, is now incarcerated basically by Tony Blair of Great Britain.  And appealing a conviction for basically not being a real attorney.

But now and then, things are always way more complicated than just the basics, now aren’t they?

So, what is this strange proclivity and magnetic like attraction of attentions that are religiously, habitually, perpetually, playing out before the worlds eyes, concerning half a century of United States Presidents with one single lowly convict?

And, why does every single, Tom, Dick and Harry reporter and or underground citizen of the United States care what Charlie thinks?  ‘Forever is Always Forever . . . ‘  ALL THE WAY ALIVE Charles Manson:

“A revolution against pollution is the only solution.”  –See’Em?