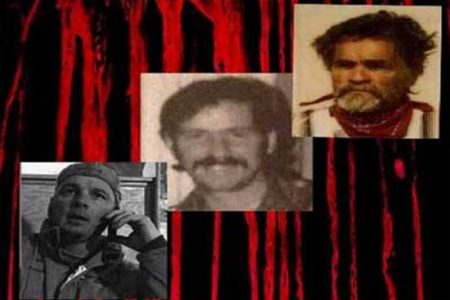 66For Brother99 the Family Jams said . . . was the real moving motive . . . the Beatles and D.A. Bugs 6Helter Skelter9 was just the ride of one weird brother, kinda owned by the government of that time.  1969.  The real brothers and sisters with the blood on their hands; and by their own personal FREE  wills, had other real motives all their own.

Charles WATSON, x[NOT CHARLES MANSON]x CHARLES WATSON! had bad dope deals while flying on secrets of speed in his mind.  Susan Atkins, had a combination, Satan twin brother Jesus man/boy child wild thing, while flying on secrets of speed in her Master Mind!  Linda and Patricia only knew 2: 6Do what Tex says9 for their family jams, on their hippy/slippy double minded, double crosses, for Bobby-Cupid of Linda?  Who fucking knows or cares anymore?  Charles Manson, prohibited speed from the family it’s been shown many times.

The people who are still alive who remember this case, should before they die, confess, and admit:  Something was, and still is, really wrong about it, on way too many levels.  O.J. was not the trial; the Mendes Boy’s were not the trial; the M.J. child sex could not have been the trial of the 20th/21stcentury; that the ‘No Name Maddox’ – was, is and will always be.

Just under the Nuremberg War trials, of course, where after the Manson’s become the 2nd public enemy number one, after his guitar mentor Creepy Karpis and the 1st incarnation of a Hitler after Hitler in multimedia?  With big bad wolf hunting witchcraft on trial TV, movie, books, law.  Not Just that the President of the United States declared the Manson 66GUILTY99 before the trial was even over; nor, just that the defendant wasn’t allowed to represent himself after being painted ‘insane’ but was actually in jest declared more than competent, to do so?

But when a civil servant can become a New York Times ‘best selling horror story fiction author’ to the tune of $7,000,000.00 based on witchcraft in a 20th century judicial system of California law case . . . THE PEOPLE OF CALIFORNIA VS CHARLES MANSON . . . something is seriously screwed up!  YOU PEOPLE owe him more than anyone.

Just because one survived the Holocaust, does not give one creative rights; to write stories about, ‘Christian’s seeking to murder the Devil’s child.’  Speaking of ‘Rosemary’s Baby’ written and directed by the “victim” Roman Polanski (whose wife and unborn son were murdered) who is still in hiding some 40 years after raping a 14 year old minor in the anus (after the fact) because, ‘He didn’t want to have any children.’

There is a warning with a curse for changing one word of the Holy Bible.

“I warn everyone who hears the words of the prophecy of this scroll:

If anyone adds anything to them,
God will add to that person the plagues described in this scroll.”
Revelation 22:18

Fake news, propaganda, history, The First Amendment (Amendment I) to the United States Constitution prohibits the making of any law respecting an establishment of religion, ensuring that there is no prohibition on the free exercise of religion, abridging the freedom of speech, infringing on the freedom of the press, interfering with the right to peaceably assemble, or prohibiting the petitioning for a governmental redress of grievances.

In physics, the term observer effect refers to changes that the act of observation will make on a phenomenon being observed. This is often the result of instruments that, by necessity, alter the state of what they measure in some manner.

In a world where the creators, the Mothers of Invention, pregnant with ideals, grooming their children to play act Lucifer of the forbidden fruits, and the forbidden music, beauty and knowledge: Testing, Teasing and Tempting your Evil . . .

*McFarland Simpsons creator like the Greeks blind Homer of Western Civilization predicted the Trump card, real to some and false to others, fiction becoming fact and facts becoming fictions.  DaVinci Codes everywhere.  How many whores can have a virgin birth of a ‘No Name MADDOX’ misogynist, antagonistic bastard???

If you have a Tesla in your mist who virtually provided the world with free wi-fi and in effect, free power worldwide but you steal it from the dying bankrupted blacklisted man, and hide it for over a hundred years while only letting the military play with it and then charging people after realizing it was a win, win, military move to let everyone have it all along, (add your bundled carriers) that are buying.  SUCKERS!

There are six abandoned and vacant homes in America per homeless person in America.
Isn’t capitalism fun!  You got a Manson living out of your garbage cans and  turned him into a billion dollar industry of true crime entertainment.  Movies, books, music, etc., but prevent his biological Grandson from visiting the man on his/your historic deathbed.  He’s Hollywood UNHOLY history, not a real person, with a real families history, is how you look at it?  PIG.
The well-being of Jason’s grandfather is the primary concern these days.  How a Nation treats its convicts, its elderly, its mentally handicapped is the issue.  Jason is seeking legal professionals interested in not only protecting but in regaining his grandfather’s rights; and his own rights to his biological surname and next-of-kin rights, seeking pro bono legal aid.  Meaning: the burden carried (for the public good).
Someone well versed in almost all fields of law:  Constitutional rights; civil rights law; criminal law; family law; mental health law; intellectual law and entertainment law.
They say Manson’s own mother sold him for a pitcher of beer.  One of my own blood families ‘public’ grandfathers, Stephen Foster; they say, sold his rights to his entire music catalog for some booze money.
Those patriotic songs became the very first: FREE MUSIC OF PUBLIC DOMAIN.  Also, being related to Betsy Ross (as far as BLOOD biology and patriotism go) it makes the ‘Manson Myth’ much more understood and personal to me.
Not to mention, that the Foster families graveyard is the very same graveyard BLOODLINE where George Romero filmed his very first black and white original, ‘Night of the Living Dead’ essentially: FOR FREE, since he was cheated out of the rights –legally.
I can relate to Jason’s ‘Quest to meet the Father’; reach and have ‘Atonement with the Father’, due to the mythologist Joseph Campbell’s and psychologist Carl Jung’s:  Archetypical teachings of the Hero’s Journey from the Odyssey thousands of years ago, still the same all the way past Star Wars yesterday.    ‘So As Above, So Below’.
Read the Holy Bible and the Greatest Story ever told; of how the Holy Ghost, Jesus and the Father eventually coming all back together as one, to redeem and revolutionize the whole world wide web and everyone living and/or dead within it.

“And the graves broke open.  The bodies of many holy people who had died were raised to life.” Matthew 27:52
The conception of A.T.W.A. is profound.  “A war against pollution is the only solution.” is profound.  While what pollutes you maybe far different than what pollutes me, I think we all follow the rule not to shit in our own beds or piss in our own waters.  Even though Jesus did say something, to the effect, when charged by the Pharisees for not washing his hands before eating, “You should be more worried about what comes out of your mouths then worried about what you put in them.”

At Standing Rock, in the Native Land of Crazy Horse, the antiquated capitalist ideal that we need oil so bad, you can still claim ‘Eminent Domain’ and/or ‘Manifest Destiny’ over the truly FREE futures withheld by the capitalist pursuit of his or her selfish, ‘Life Liberty and Pursuits of Happiness’, doesn’t translate to, what’s right for the very, very, few remaining Natives of the Americas.

It annotates what’s wrong, when ‘Prohibition’ of anything occurs.  Much less, the alcohol fueled cars and plans of Henry Ford’s that became very lucrative for the money minded blood sucking leaches to scrap a hold on, it had to be oil.  So now the Natives of America suffer again, the black gold to poison their great rivers and the bloodlines of the Earth.  Their waters and their sacred Holy lands and graveyards, will be further polluted for the public good?  Is that what you believe?  Because you buy bottled water?