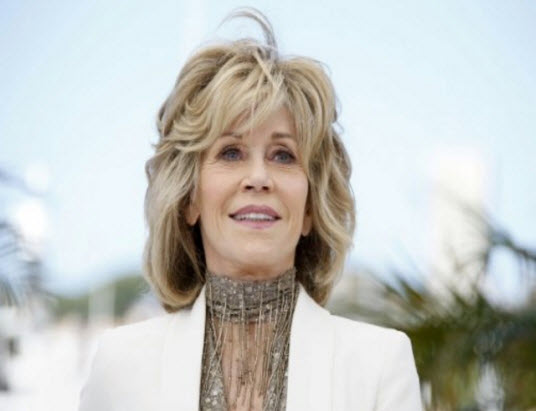 Half a century after they simmered with youthful sexuality in “Barefoot in the Park”, screen legends Jane Fonda and Robert Redford have teamed up again in a tale of love and sex in later life.

The Netflix production had its premiere Friday at the Venice film festival, where the veteran stars were to be presented later with Golden Lions in recognition of two of the longest and most successful careers in US cinema.

Based on a Kent Haruf novel, the film sees Indian director Ritesh Batra, a talent fostered by Redford’s Sundance Institute, delve into a world of creaking bones and reading lights that is increasingly a focus for a film industry chasing the disposable income of retired baby boomers.

“The way the film biz was going it was very much towards the younger audience and there were very few opportunities for films to be made that would satisfy the older audience,” Redford said.

“And I wanted to do another film with Jane before I died. We’ve had a long history in film and I wanted us to be able to have another chance. We were getting older, and I thought ‘wait a minute here is a film that can satisfy our genuine age’.”

Fonda said the film sends an important message about the potential for love and sex to improve with age.

“I think it gets better because we are brave, what the heck do we have to lose,” the multiple Oscar winner said.

“So my skin sags,! So does his. I know what my body needs and I am not afraid to ask for it,” she said, chiding the director for cutting the film’s solitary sex scene too short.

“It will be in the DVD extras!” Batra responded.

That changes when, on the instigation of Addie, they begin sharing a bed — on the basis that company and conversation will help Addie’s insomnia and ease the loneliness they both feel most acutely after dark.

As the friendship develops, the nighttime chat becomes more serious. It emerges Addie and Louis share lingering regrets over how they handled traumatic moments in their married lives and consequent strains in their relationships with their adult children.

The bond between the two deepens when Addie’s seven-year-old grandson comes to stay with her while his newly-single father struggles to keep his life on track.

Soon the question of what kind of relationship they are having, and where it is headed, becomes more pressing.

The director was born in the same year that Redford, now 81, and Fonda, 79, starred in Sydney Pollack’s 1979 western, “The Electric Horseman.”

Prior to that, the pair played young married couples in 1966’s “The Chase” and the following year’s “Barefoot in the Park.”

On all three of the films, Fonda fell for her co-star, she said. “On Barefooot it was me who couldn’t keep my hands off him,” she joked. Although both actors were married at the time, Redford suggested the sexual chemistry on screen was not just about acting craft. “There were things spoken and things unspoken and the unspoken carried a certain weight, that is all I can say,” he said.

Also showing in Venice, and tipped as a potential contender for the Golden Lion, is “The Leisure Seeker”, which sees Helen Mirren and Donald Sutherland play a free-spirited older couple who embark on a Boston-Florida road trip to get away from their doctors and bossy grown-up children.

The issue of loneliness after bereavement also provides the backdrop to “Victoria & Abdul,” Stephen Frears’s handling of the true story of the elderly Queen Victoria’s friendship with an Indian clerk.

“Our Souls at Night”, which was shown out of competition here, will be released by Netflix on September 29.