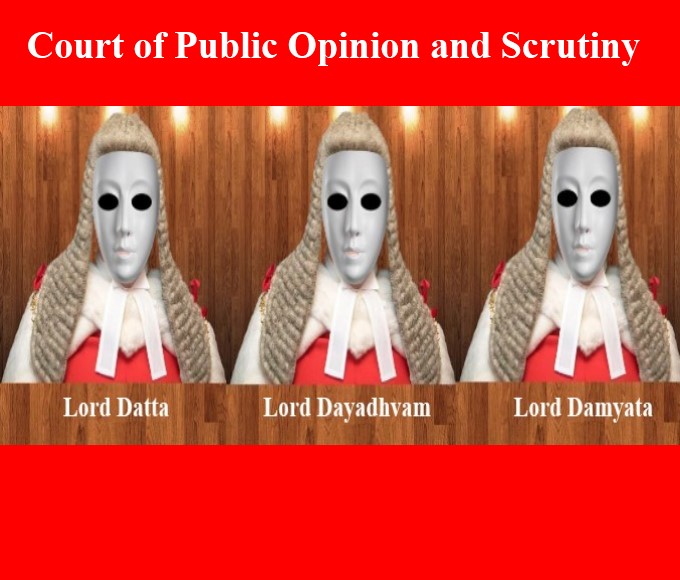 In a scathing Judgement, published today the Court of Public Opinion and Scrutiny quashed the conviction of the man known as the Devil’s advocate who defended the likes of Saddam Hussein, Ian Brady, Slobodan Milošević, Charles Manson, and other Dictators and high-profile criminals.

The Court of Public Opinion and Scrutiny was established in 2003 by retired Judges of the High Court and Crown Court to review the cases of those “referred” to the Court by a member Judge.   It is thought that a Crown Court Judge brought the case to the attention of the Court over a barrage of “things that went wrong” with Di Stefanos Trials in 2013, presided over by the now deceased Judge Alistair McCreath.  The rules of the Court are in accordance with the same rules of the Court of Appeal and the Judges take the pseudonyms of Lord Datta, Lord Dayadhvam, Lord Damyata and their identities remain secret.

One of the retired High Court Judges said, “we do this to protect the integrity of the judiciary, but it is correct to say that some of the cases we have all participated in have left us disturbed enough to carry a weight on our conscience.”

The Devil’s Advocate told the Court that the current, “Court of Appeal Criminal Division had become “intellectually dishonest and of the countless misdirection’s and what he terms “wrong turnings.” His Trial took place in 2013 and thereafter subsequent appeals.

The full Judgement makes harrowing reading, and a jurist said, “the whole matter was so badly handled that the papers should be sent to the Attorney General for review as to whether anyone should be prosecuted.”

The Court heard evidence that Di Stefano’s PNC (criminal record) had been falsified and that it included offences he “not only did not commit but could not have committed.” The Judge sentenced Di Stefano on the basis of a criminal record he simply did not have. He told the Court that when an “honest prison officer” obtained the real PNC in 2018 it was a surprise to all because “it portrayed the real position and that the Judge himself had been misled.” There were countless errors and equally countless occasions that the whole matter could have been rectified” but it has not.

The Judges dug in their heels because they were too deeply involved. “The power to apologise is what is lacking in the Court of Appeal,” said Di Stefano.  Last year after eight years in prison Di Stefano wrote to his Trial Judge Alistair McCreath who retired early after Di Stefanos Trial and joined the Parole Board of England and Wales. The letter which we publish in full makes important reading and it is thought that Judge McCreath may well have been the Judge who referred the case to this Court.

“What is sad is that Judge McCreath replied to me replied to late last year. He said that I had been treated like a “drunken lamb at a wolf party,” said Di Stefano.” 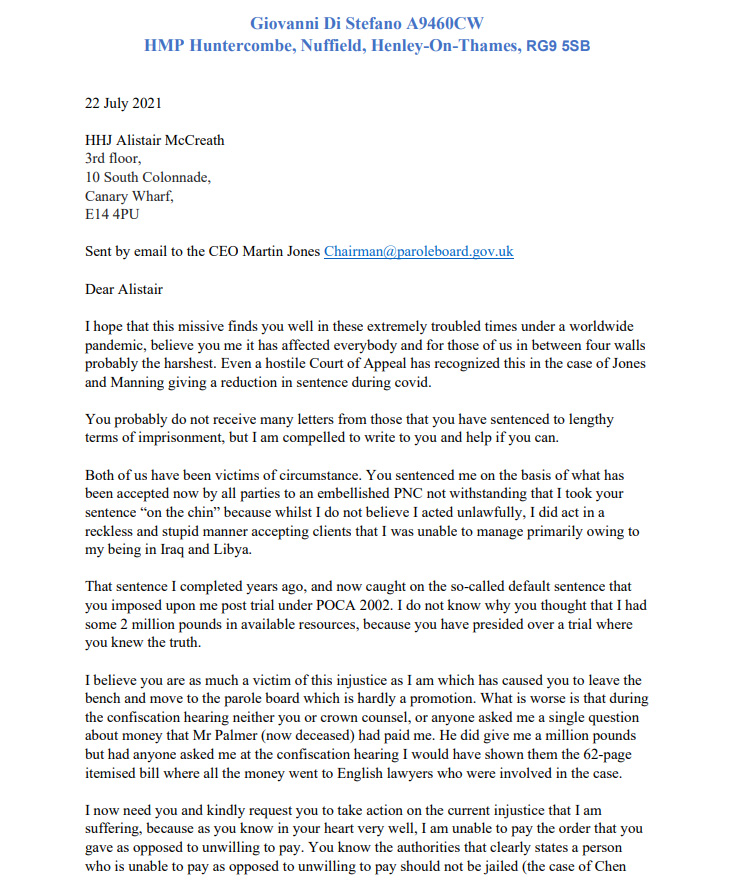 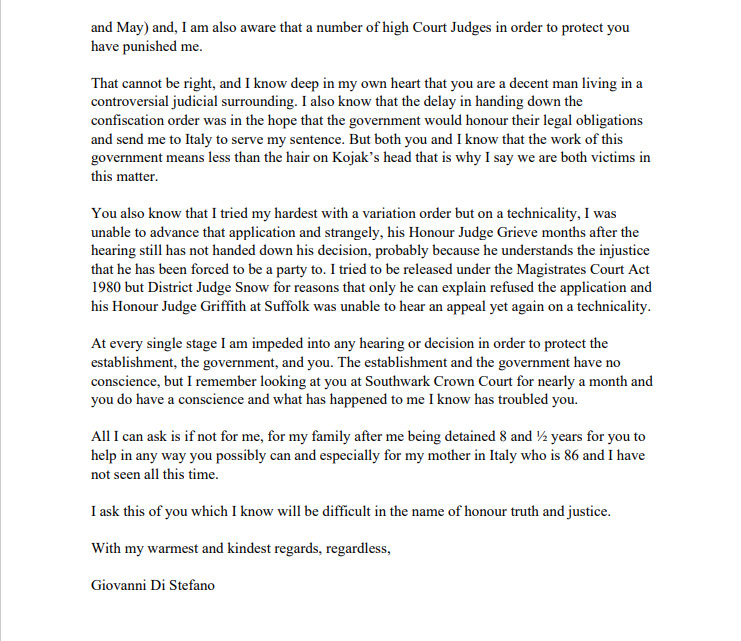 After nine years though it is a pyrrhic victory for both me, The Judge and the Prosecution.

“No one has won, and justice has been badly scarred,” said Di Stefano. Asked what he would do now? Di Stefano replied, “See my mother aged 86 and I’m sure I will get a good telling off even at my age which may well be richly deserved,”

THE VICE PRESIDENT OF THE INJUSTICE DIVISION

The Appellant Appeared in Pro Per

(As Approved by the Court)

“When William the Conqueror invaded England in 1066, he took over the most efficiently governed Kingdom in Europe, but he soon grasped the need to reinforce its system of government and law. This meant trying to provide some central system of justice over which the King had control, for William understood that it was only by making laws which had to be obeyed and could be enforced throughout the land that he could exercise real power and control over all his subjects. For centuries English monarchs had governed the outer reaches of their Kingdoms through Sheriffs, but to secure their authority they would need to travel the country, taking their Court and Couriers with them. When Williams Court progressed, he and the most powerful Courtiers attached to his Curia Regis would listen to those who came to them with their grievances, complaints, or accusations and they would give Judgement. All the main Courts today can be traced back to Williams Curia Regis. The King would literally sit on a bench to hear cases in his own Court. That is why today we have the Queen’s Bench Division/Kings Bench Division. However, not every monarch made a good Judge, or for that matter was particularly interested in his system of justice. In the years that followed Kings delegated their work in the Courts to others. They and their advisors in the Kings Counsel establish Royal Courts, appointing men who became known as Judges to sit in them, and leaving it to them to decide many cases which might previously have been tried by the King himself, those Judges sat on behalf of the monarch. They sat ex officio the monarch.”

“I have taken account of and given appropriate weight to the fact that this is the fourth time you have been convicted of offences of fraud.”

“He was expressly asked if he wished to apply to make oral submissions to this Court and he declined to do so.”

The Appellant told us this was not correct.

“It follows that all preferred the version advanced by the Crown because they could support such with a PNC. I said that the PNC had been interfered with but of course, who would believe that the police and the Crown would be party to such?”

“In essence the police and the Crown introduced in my trial false documents regarding antecedents.”

THE VICE PRESIDENT OF THE INJUSTICE DIVISION (Lord Damyata):

“The Financial Investigation Unit at the City of London Police began their investigation in the year 2003. The Appellant provided investigators at the time and thereafter, with unhindered access to all accounts which either he held himself or to which he was a signatory both in this country and abroad, thereby saving considerable time and expense in obtaining Orders abroad.”

“Despite having thoroughly investigated the Appellants finances, the Crown having the intervening years found nothing to suggest the existence of any assets whatsoever, nor indeed ever having accumulated assets at any stage of his financial history, whether in this country or abroad.”

“The Judge stated in open Court that he would deliver his Ruling before Christmas this year and that it would not be necessary for Mr Di Stefano to attend.”

“I believe also that, as myself, Your Lordship has read the Proceeds of Crime Act 2002, and your Lordship will agree that the words ‘Hidden Assets’ do not appear anywhere in the Act.”

“The defendant is prohibited from styling himself as a lawyer or giving legal advice to anybody.”

“Condemning me to an inevitable finding of guilt.”

“Abused his position as legal advisor….”

“The prosecution accept that I am a legal advisor and that I abuse my position so therefore I must be a lawyer. I cannot abuse a position I don’t have.”

No complaint has ever been made to the police and no civil litigation by the Thakrar brothers throughout the period. The Appellant told us that it was inevitable that as they were convicted fraudsters in the past, they may well have been coerced into giving evidence which in any case was not of their own free will. He told this Court that if someone owes you half a million pounds you do something about it.

“You can imagine the Registrar was not pleased with me. No one likes their power taken away from them.”

“After that they were not going to give me anything and my card was marked.”

“If the Vice President of the Court of Appeal does not know the law and makes an Order, he cannot make then surely someone must question whether he is a qualified Judge and lawyer?”

“Your Majesty’s Judges are deeply conscious of their own many short comings …”,

the Master of The Rolls, Lord Jessel, objected strongly, saying:

“I am not conscious of many short comings and if I were, I should not be fit to sit on the Bench.”

“Nothing much has changed has it.”

“The Court treated Mr Samuels almost like a criminal. They almost said to him how he could defend a serial killer. The Court was rude, and it was embarrassing for me to be a witness.”

“Was this prosecution guided by any political figure to your knowledge?”

“I don’t think so. There was no supervision on this case at all. I had no help from anyone. No Detective Inspector wanted to touch this case. For years it just stagnated. Then suddenly in 2010 someone gave me the go-ahead to actively pursue this, and I met with the Leading Counsel for the Prosecution. Before that this case was going nowhere.”

“The Defendant may well seek asylum in a friendly country that dislikes Tony Blair.”

Although bail was varied, that objection is a matter of record and is of some concern

“A sentence of three years after credit for plea for a single offence was at the top of the range provided under the old guideline that applied but, in our Judgement, not excessive.”

For that offence which was committed during the same timeframe as the others and taken into account that there would be a one third reduction in sentence, and according to the Trial Judge an offence that was “in a league of its own” any sentence above that of five years concurrent to all in our view should not be justified.

“The insolence of office.”

It would appear to us that such have been ignored in this matter. Again, as a standalone Appeal we would reduce the confiscation order available assets of £1- or one-day imprisonment.

THE VICE PRESIDENT OF THE INJUSTICE DIVISION (Lord Damyata):   I agree

The said conviction at the Southwark Crown Court of the Appellant Giovanni Di Stefano on the 27 March 2013 is quashed.

If any of our readers would like the pdf file for the judgement in full please email contact@opcglobalnewsandmedia.com for a copy.