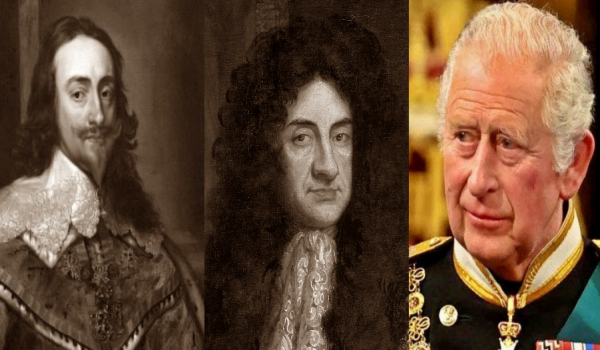 Over 400 years ago King Charles II was crowned King. He was very much a promiscuous person who had more than 13 illegitimate children, yet, ironically, had no children with his wife Queen Catherine of Braganza. It is said that the Royal lineage with Prince William and Prince Harry’s mother, the late Princess Diana Spencer, could be traced to King Charles II. 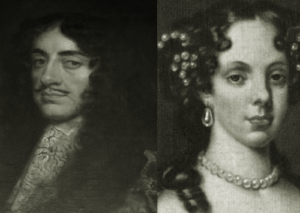 King Charles II with his wife Queen Catherine of Braganza

Before him came his father Charles I who was executed in 1649 for high treason which paved the way for a temporary republic under Oliver Cromwell. There may even have been a previous Charles III who was known as Bonnie Prince Charlie, were it not for the fact he was defeated at the Battle Culloden in 1746. 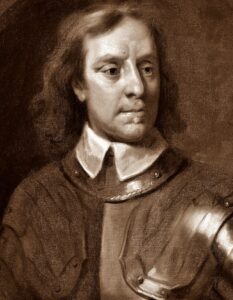 King Charles I only became King by mistake. His elder brother Prince Henry died of typhoid aged 18. Charles was then 11 years of age and had an acute stammer. Charles 1 tried his best to become someone of importance following his father James I, who as James VI of Scotland had inherited the English Crown from his cousin Elizabeth I. It is interesting to note that the late gracious Queens father King George also had a stammer, and both tried to cure it by speaking with pebbles in their mouth. Charles I became King in 1625 aged 24, and he immediately clashed with Parliament and the people by demanding large sums of money which he used to purchase works of art still today as part of the Crown’s Art Works.

Capriciously he dissolved Parliament in 1629 and ruled alone, and if that was not bad enough, making him unpopular he introduced heavy taxes. Tired of all the infighting he allowed Parliament to sit in 1642 but things did not improve and incredibly King Charles I declared war on Parliament. 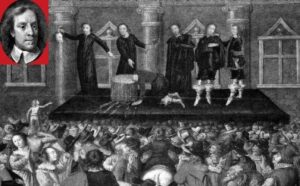 Charles I Execution in January 1649

Charles I was captured during the civil war, tried for treason and executed in January 1649. His eldest son Charles was 18 years old and had sought refuge in France and returned to England to win back the Crown, but he was defeated in the Battle of Worcester in 1651. Amazingly Charles spent 6 weeks on the run and legend says he dressed up as a servant, and even climbed a tree to evade capture. He went back to Europe and as incredible as the story continues Charles II was invited to come back to England to dissolve the Republic and take back the Crown. His only undertaking was to co-operate with Parliament. In May 1660 Charles II returned to England and the public were tired of war, and tired of puritans, who had even banned Christmas. For Charles II the time was right for a party. 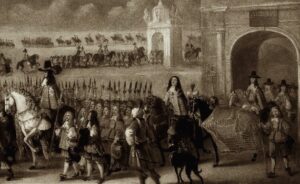 Legend has it that in the middle of his Coronation Procession he stopped the carriage to go into a pub, have a drink and kiss a lady. He was the first English Monarch to advocate the love of chocolate believing it to be an aphrodisiac to enhance his sexual desires and performance. Legend also has it that when a thief sold the Crown Jewels King Charles II found it so amusing let, him off scot-free and even gave him a pension, it is said he would spend a good part of the day feeding ducks in Saint James Park. For all intents and purposes, lived through the Plague and was actually a hero in the Great Fire of London in 1666. Where, without sleeping for days even urged his subjects to knock down houses creating fire breaks and he in person passed buckets of water to douse the flames and organise food for those that were homeless. 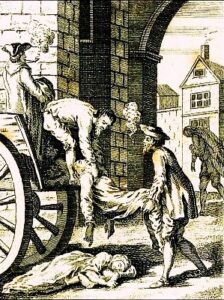 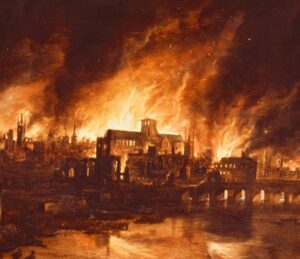 Very much in the Clinton and Trump-style the more mistresses he had the greater the public popularity. King Charles II had more than 13 illegitimate children handing out titles to nearly all of them. One of those titles went to the Spencer family which is why the Royal lineage could be traced through Princess Diana, Prince William, and Prince Harry, rather than through the Windsors. 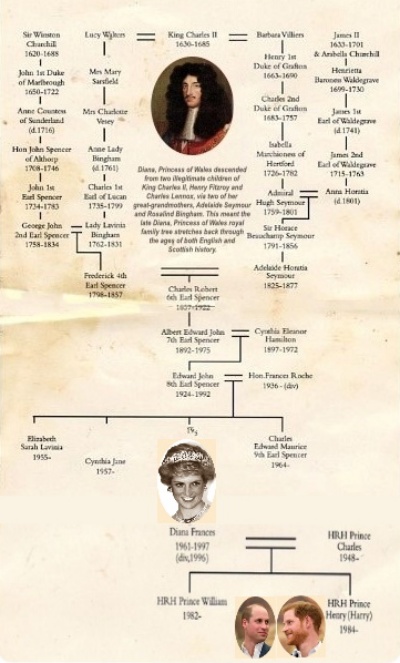 The Trial of King Charles I, was controversial and unlawful, as Sovereign immunity was in essence a valid defence. International lawyer Giovanni Di Stefano known as the ‘Real’ Devil’s Advocate controversially wrote a brief in 2004, and on 17 May 2011 wrote a moving letter to the late and gracious Queen Elizabeth II. A copy was also sent to the now King Charles the III and to both Prince William and Prince Harry. Charles the III was interested and on the 24 May 2011 Di Stefano received an acknowledgment and reply. 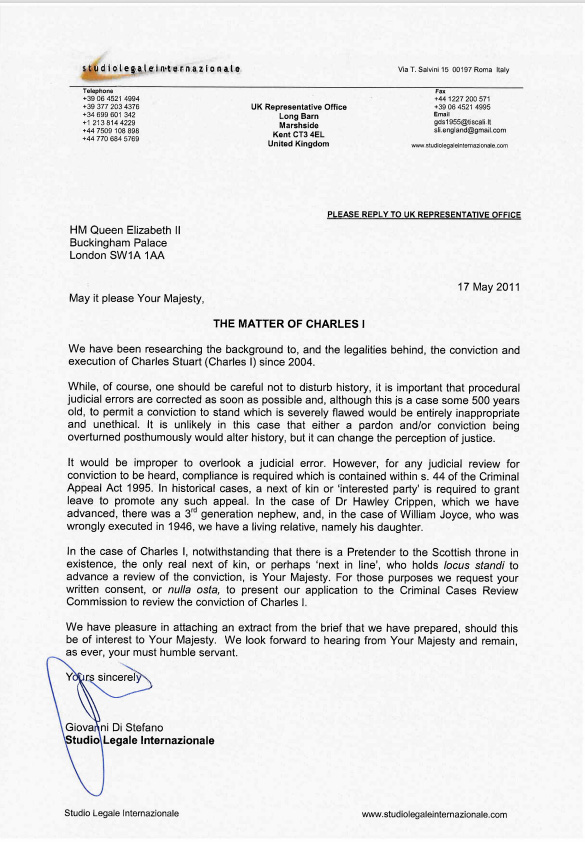 Letter to The Late Queen Elizabeth II dated 17 May 2011 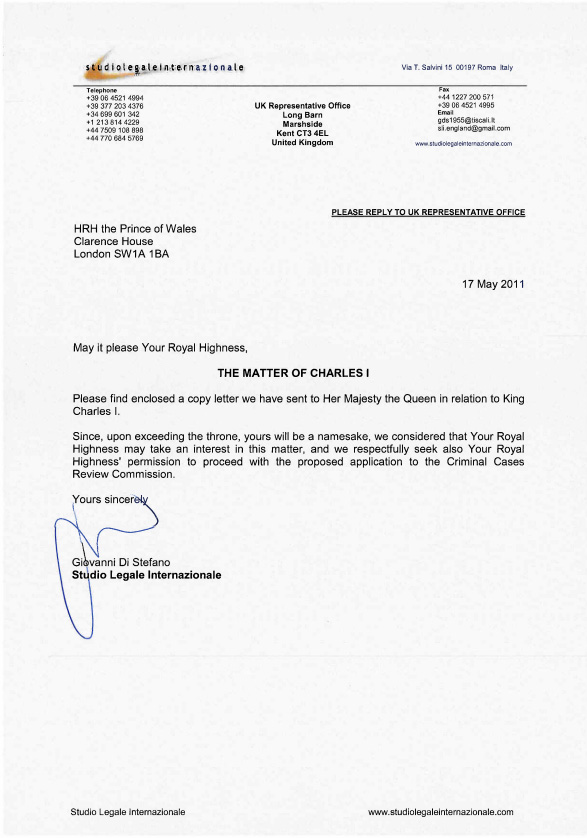 Conversations continued until the 13 June 2011 when the lawyer wrote a further detailed letter to the late gracious Queen Elizabeth II and, now, King Charles III. 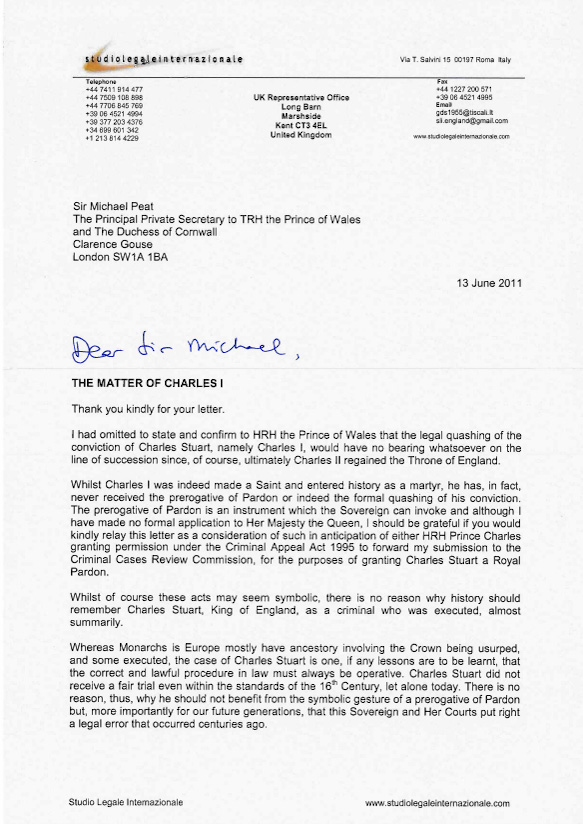 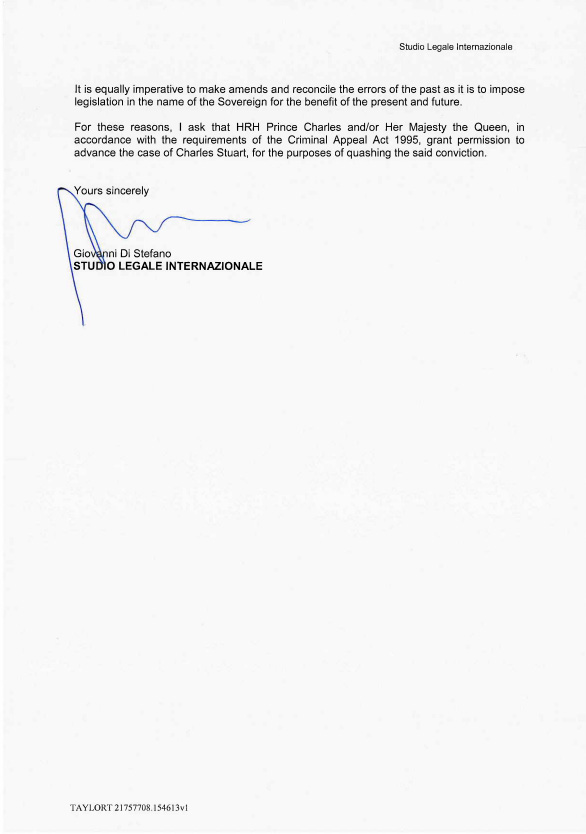 This whole saga had raised the interest of four members of the Royal family who could see the benefit in cleaning the lineage in order that one day when King Charles III descended the throne there would be a clear line. On 22 June 2011, the late gracious Queen Elizabeth II wrote to Di Stefano inviting him to advance the Prerogative of Pardon to the late gracious Queen’s Ministers.

After some correspondence with the government who were appallingly not so keen on the idea, the lawyer regrouped to consider what further actions could be taken.

“I thought of going to the Court of Appeal to quash the conviction and I had an interested party, namely, the royal family that would permit me to make such an application. I also thought about the CCRC, but they don’t like historic cases,” said Di Stefano.

The Criminal Appeal Act 1970 and 1995 allows relatives or next of kin, even distant ones, to instruct lawyers to bring an appeal on behalf of a deceased person convicted of a criminal offence. King Charles I was tried, convicted and executed. The Criminal Cases Review Commission also considers historic cases, but Di Stefano found that there would be prejudice and stone walling if the application were advanced solely by him.

“So, I decided to wait but now the time is right for a Pardon for King Charles I, since no relative, no King, wants a criminal as his relative and what is more the Trial itself of King Charles I, was unlawful, and contrary to law as it then was, as well as it is now,” said Di Stefano. 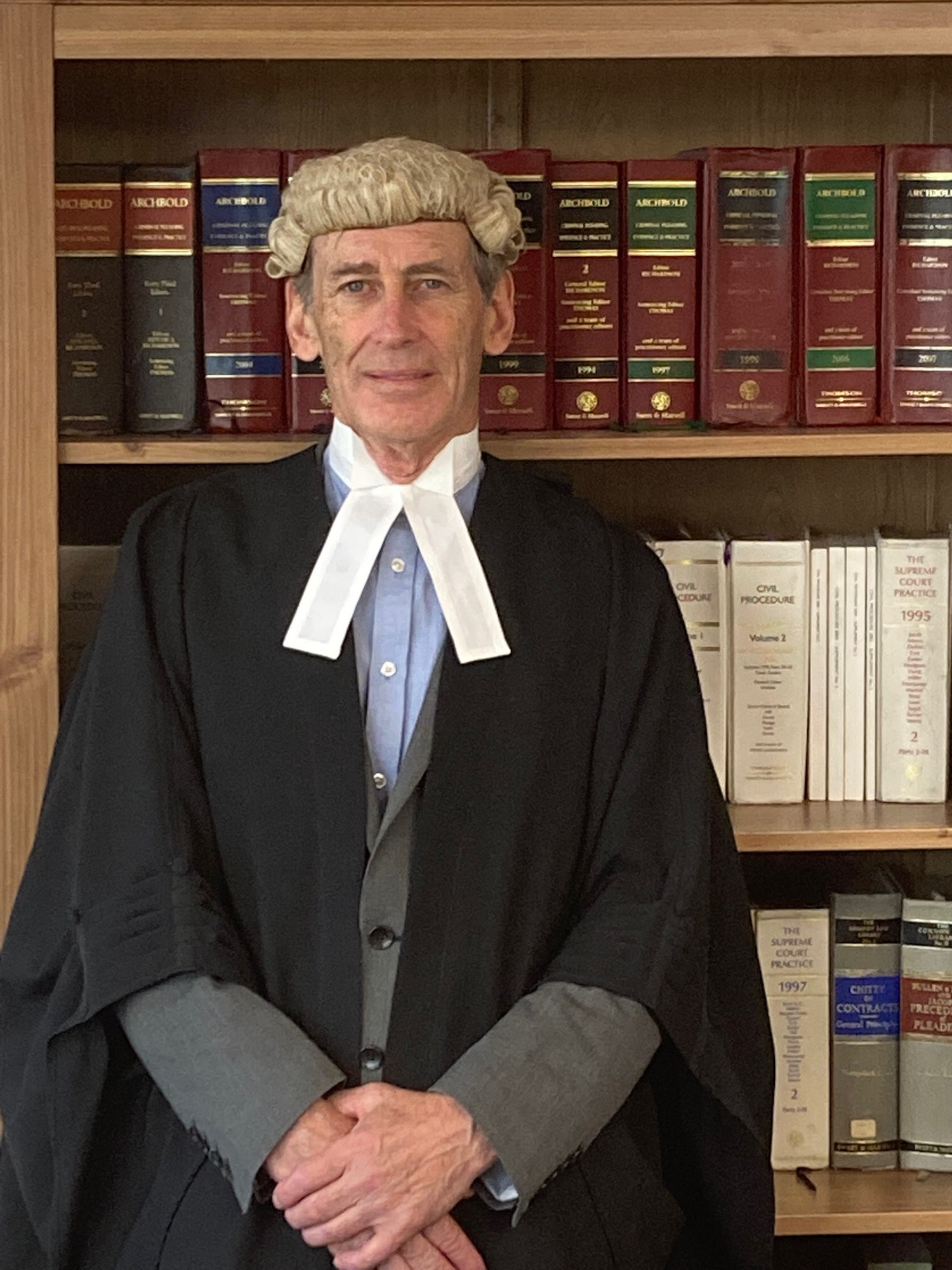 The ‘Real’ Devil’s Advocate has enlisted the assistance of David Martin-Sperry a top Barrister of more than 50 years standing, Donnamarie Kearney LLB (a law graduate from Scotland), Michael S. Di Stefano (BA) and C. A .Bayford a historical researcher, to sign the request for the Pardon of King Charles I, as was clearly the wish of the Royal family in 2011, and today.

NB: Some images retrieved from Google, will remove at the owner’s request.