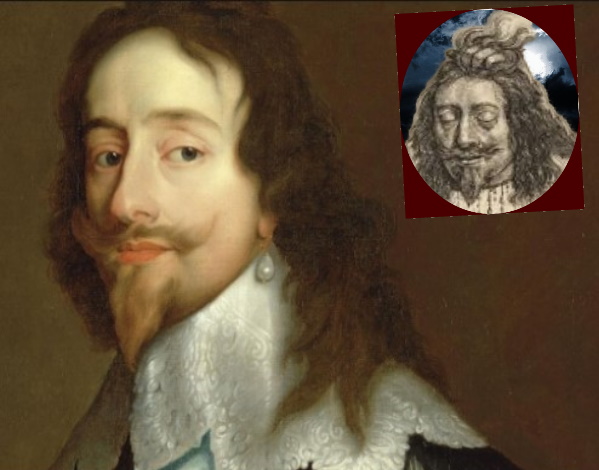 Further to our article published on the 16 September 2022 Legitimate push to pardon Charles I should now be a priority for the government. OPC Global News and Media publish the Call for the posthumous pardon of HRH King Charles Stuart I that has been sent to Queen Margrethe of Denmark, Crown Prince Frederik of Denmark, Brandon Lewis MP, and Keith Brown Justice Minister for Scotland.

Giovanni Di Stefano, now widely referred to as ‘the Devil’s Advocate’, David Martin-Sperry, a reputable and established criminal barrister, Donnamarie Kearney, a law graduate from Scotland, Michael Di Stefano a graduate in History and Politics, and Caroline Bayford, a history and genealogy researcher, have together presented a Call for the posthumous pardon of HRH King Charles Stuart I. This Call is made to the Secretary of State for Justice in England and Wales, to the Secretary of State for Justice in Scotland, and additionally to Her Majesty Queen Margrethe and to Crown Prince Frederik of Denmark, Anne of Denmark having been the mother of Charles I.

This group of five has been working towards this end since 2011, with the knowledge and with no objections from Buckingham Palace. David Martin-Sperry, an eminent barrister practicing for over 50 years and specialising in miscarriage of justice cases said: “The whole point in this case is that at all material times Charles Stuart was the recognised and accepted King of England. Acts of Parliament in force at the time of the trial and even the death warrant itself so describe him.” Giovanni Di Stefano added, “As a consequence of this, the doctrine of Sovereign Immunity kicks in.”

This Call for a posthumous pardon is based on the proposition that the Sovereign is quite simply immune from any sanction of the criminal law – which at the time included the death penalty. By way of example, Giovanni Di Stefano added “Recognising this, King Henry II allowed himself to be publicly flogged for his participation in the killing of Archbishop Thomas à Becket by four of his knights in 1170. That was him punishing himself, as only he had the right to do.”

Donnamarie Kearney has advised that Scotland has jurisdiction because Charles I was born in what was then an independent country. The Act of Union did not come into force until over 50 years later.

For her part, Caroline Bayford produces a family tree tracing the bloodline of the now Prince of Wales and of Prince Harry back to King Charles Stuart II, the son of Charles Stuart I through their mother Lady Diana Spencer.

Michael Di Stefano now encapsulates the case in this way: “It is necessary to clean the lineage, especially since Charles Stuart I suffered a grave miscarriage of justice.”

This group of five today seek to rectify the miscarriage of justice that occurred hundreds of years ago. David Martin-Sperry added that a copy of the Call for a posthumous pardon was being sent to his Majesty King Charles III and to the Prince of Wales.”

A decision is expected in due course.

“The Free Pardon, as an exceptional Act of Grace, should be confined as far as possible to those who are morally, as well as technically innocent. This ‘clean hands’ doctrine does imply that the Secretary of State must be satisfied before recommending a Free Pardon, that in the incident in question the defendant had no intention of committing an offence and did not, in fact, commit one.” [Miscarriages of Justice, Sixth Report of the Home Affairs Committee House of Commons (1981-82) H.C. 421, Minutes of Evidence, para.3]

“WHEREAS it is notorious that Charles Stuart, the now King of England ….”

Even the death warrant itself recognised that he was King of England:

“Whereas Charles Steuart Kinge of England…”

Dated this day 3 October 2022 – Being the date when his Royal Highness King Charles III attended Dunfermline Palace being the birthplace of King Charles I. 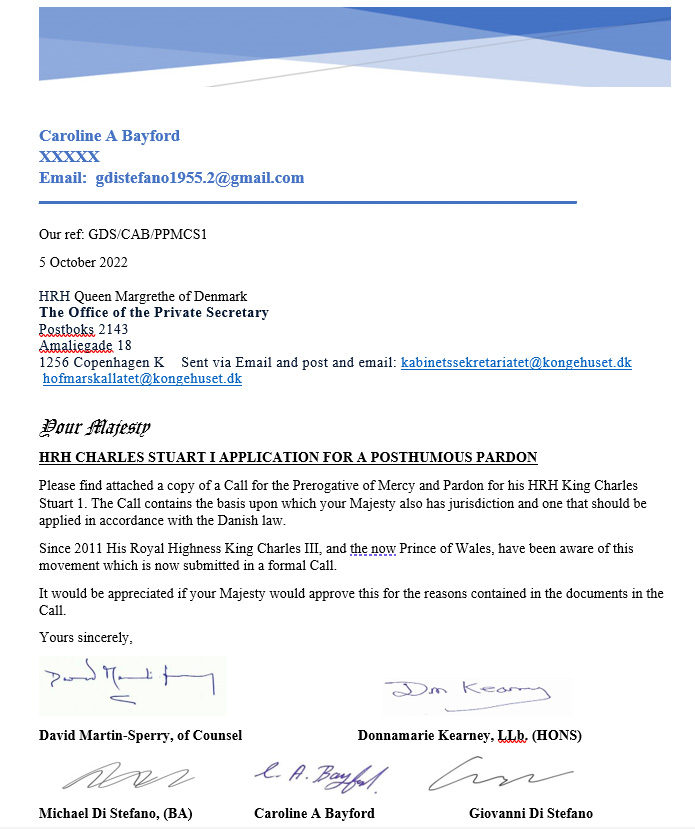 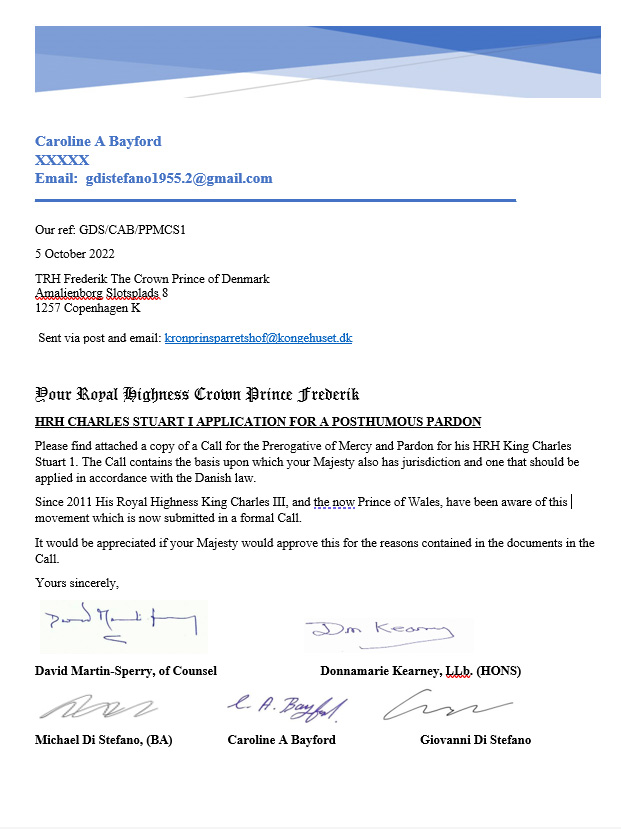 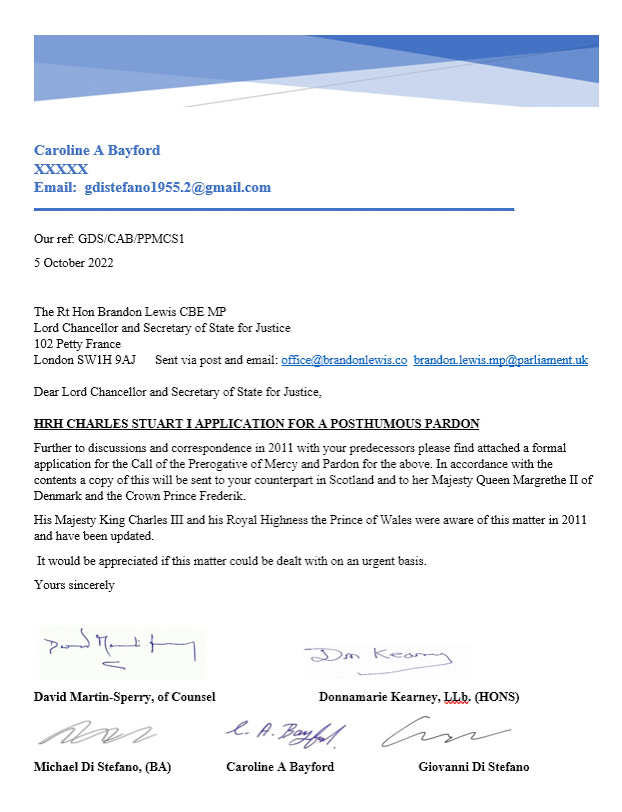 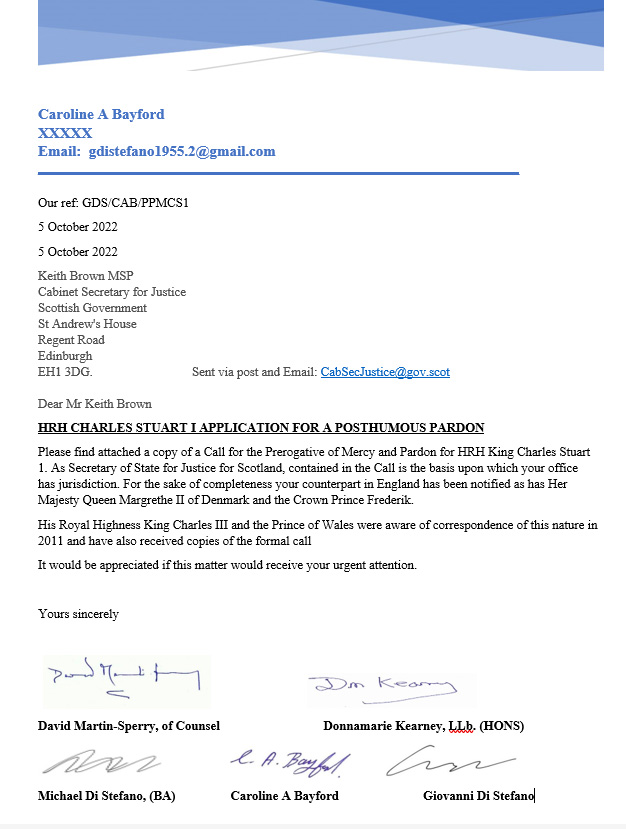