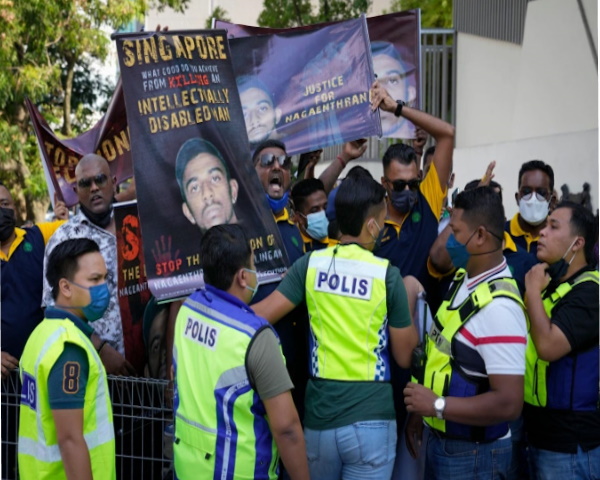 Branson, who had lobbied against Singapore’s decision to execute a Malaysian man convicted of drug trafficking in April, said on Monday that a televised live debate “cannot do the complexity of the death penalty any service”.

Singapore’s Ministry of Home Affairs had extended the invitation to Branson earlier this month when the Virgin Group founder published a blog post titled What’s the matter with Singapore, that condemned its “stubborn use of the death penalty, particularly for drug offences”.

In that post, Branson had criticised Singapore’s execution of Nagaenthran Dharmalingam, a Malaysian man with learning disabilities who was sentenced to death for carrying 42.72 grammes (1.5 ounces) of heroin across the border, saying: “Singapore’s government seems bent on executing scores of low-level drug traffickers, mostly members of poor, disadvantaged minorities, whilst failing to provide clear evidence that it has any tangible impact on drug use, crime or public safety.”

The ministry rejected Branson’s comments, saying it did not accept that anyone in the West was “entitled to impose their values on other societies”. It then offered to fly the tycoon to Singapore for a debate with Home Affairs Minister K Shanmugam to present why the country should do away with laws it said had kept it “safe from the global scourge of drug abuse”.

Turning down that invitation, Branson said on Monday that the “brave thing” for Singaporean officials to do would be to engage with local activists.

“They deserve to be listened to, not ignored, or worse yet, harassed,” he said in a letter posted on the Virgin website.

“A television debate – limited in time and scope, always at risk of prioritising personalities over issues – cannot do the complexity of the death penalty any service,” he said. “It reduces nuanced discourse to soundbites, turns serious debate into spectacle. I can’t imagine that is what you are looking for. What Singapore really needs is a constructive, lasting dialogue involving multiple stakeholders, and a true commitment to transparency and evidence.”

He added that abolition of the death penalty was not a “Western concept imposed on the rest of the world”.

“This is about universal human rights and humanity’s shared aspiration to advance equality, justice, dignity, and freedom everywhere, for everyone.”

Singapore has some of the world’s toughest anti-narcotics laws and insists the death penalty remains an effective deterrent against trafficking. But the United Nations says that the death penalty has not proven to be an effective deterrent globally and is incompatible with international human rights law, which only permits capital punishment for the most serious crimes.