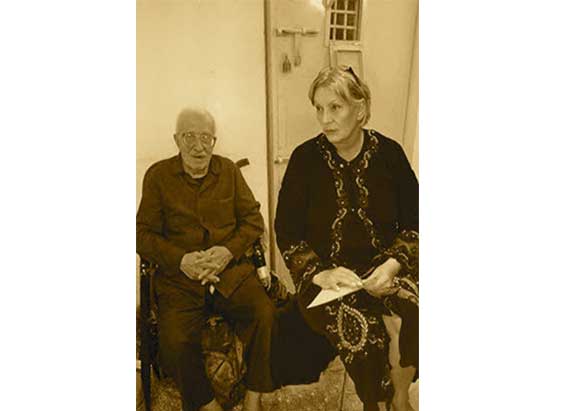 Tariq Aziz, 77, shuffles into view and sinks into a wooden chair in a prison corridor.  The man who once bestrode the world stage puffing Cohiba cigars and tippling whiskey with world leaders, smilingly justifying each and every act of aggression, or evasion, by his boss and good friend Saddam Hussein, is a hunched and shrunken shadow of his former self.

The only familiar feature is his trademark large black glasses.  In some ways he is like the Cheshire cat in ‘Alice in Wonderland’’ – the cat disappears gradually until nothing is left but a grin.  Or, in Aziz’s case a grimace. His trousers are tattered and open around the crotch. His hands shakily light up a cigarette. “American – Marlborough”, he notes, “I have to get used to these, now I can’t get cigars anymore.” 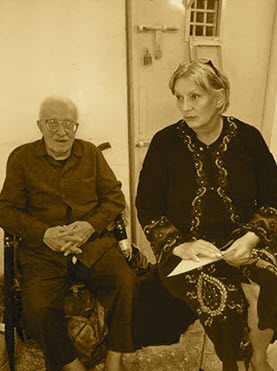 During the 2003 invasion he had famously announced in a press conference that “we will be welcoming the Americans, not with flowers but with bullets”.  But as Baghdad collapsed, he remained in his elegant riverside mansion, and agreed to surrender.  The Americans flew his wife, two sons and a daughter to Amman, Jordan in a C130 military aircraft, while he went to jail.

“I told the Americans everything I knew, but they reneged on our deal,” Aziz alleges. “If I had known how it would turn out, I would have preferred to be killed.”

Eight other former Iraqi leaders, several of whose very names had struck terror into the hearts of millions, also assemble to meet a Western journalist. A couple of months ago all nine were finally sentenced to death, and only the Iraqi President’s refusal to sign the execution warrant has kept them alive – so far. Even the Vatican has appealed for Aziz’s life to be saved: some Iraqi leaders fear Western and Christian opprobrium, if the country’s most famous non-Muslim is hanged – Aziz, though not religious himself, comes from the minority Assyrian Christian sect.

A fierce row over the men’s fate has erupted – to kill them now might cause an upsurge in terror attacks, or insurgency, just as the Iraqi leaders are trying to keep things calm enough, for the Americans to withdraw most of their 42 thousand troops by the end of the year – something most Iraqi politicians advocate, to show their own people, that they have managed to extricate their country from the grasp of foreigners.

Yet, the majority of public opinion, and the private view of most politicians,  is to show no mercy to the remnants of a regime that repressed, tortured and killed an estimated 300,000 Iraqis, and ran the country into the ground with three disastrous wars (against Iran, Kuwait and ultimately the US-led Coalition).  It is only the second time since the fall of Saddam that Aziz has seen and talked to a journalist.  He is eager to express his views, still able to communicate clearly but with a slur, due to the early stages of Parkinson’s.  “I would prefer not to be executed,” he states. “I am still hoping to die in my new home, in exile. This is the country I helped build, but I want to die somewhere else.”  How ironic, that the prison where he and Saddam’s henchmen now await their fate, besides the nine on death row,  47 other top military and government officials,  who were sentenced to life imprisonment, was used as a torture chamber for some of Saddam Hussein’s victims.

Those included government officials and Baath party top brass who had somehow fallen foul of the dictator, including scientists and other alleged traitors. After Saddam’s regime fell, journalists found secret ‘red chambers’ there – red referring to the blood spilled in these awful cells.

Wives of the detainees were often brought to the cells and, to elicit ‘confessions,’ the detainees were forced to watch through transparent panels in the cell doors as their loved ones were raped. Aziz tries to distance himself from all the atrocities of the former regime. He says he disagreed with some of Saddam’s actions, and even had the guts to tell him so, more than once.  If so, that may have explained his rather mercurial career, a close personal friend of the revolutionary nationalist, they ran desert smuggling runs together.

After Saddam had seized power in a bloody internal coup, selecting the ‘traitors’ at a Baath Party congress to be taken outside and shot dead, Aziz ran Saddam’s propaganda newspaper Tishrin.  He eventually became the deputy Premier, again returning to his job as a propagandist, then becoming Foreign Minister, and finally apparently being sidelined.

He had even been turned on by the close circle around Saddam. They managed to arrest Aziz’s elder son Ziad on what the family say was a trumped-up charge of corruption. Aziz eventually went personally to Saddam to plead for his son’s release, which was agreed, but Aziz felt humiliated and weakened. 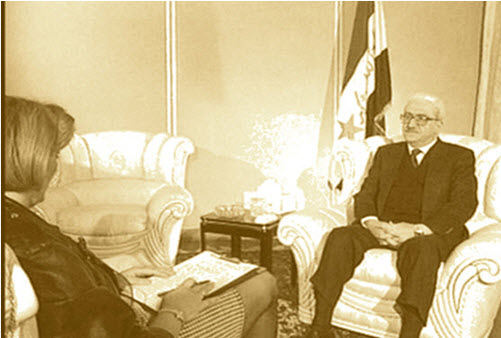 Tariq Aziz’s only wish was for freedom and to see the sunshine with his family before he departed from this mortal world.

It has just been reported that allegedly  the Iraqi Government are not allowing Tariq Aziz’s body to be repatriated to Jordan for burial to be near his family. 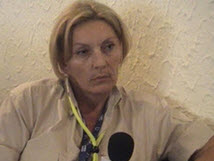 Co-founder and Journalist /Author /Producer, been working as a freelance reporter and independent producer for more than twenty years. Ms. Cedrell has worked with a variety of the top media agencies including WTN [Worldwide Television News] where she was awarded with the “Most Scoop Award -98” for her investigative reports in the Middle East.
Her genuine interest in charity and helping children in need has resulted in a fundraising TV concept named “Bridges of Hope” for Nelson Mandela’s and UNICEF’s “Global Movement for Children – Campaign”.

One thought on “In Memory Of An Old Friend ‘My Last Interview With Tariq Aziz In Khadamiya Prison, Baghdad, September 2012’ – Maria Wera Cedrell Maria Credrell”