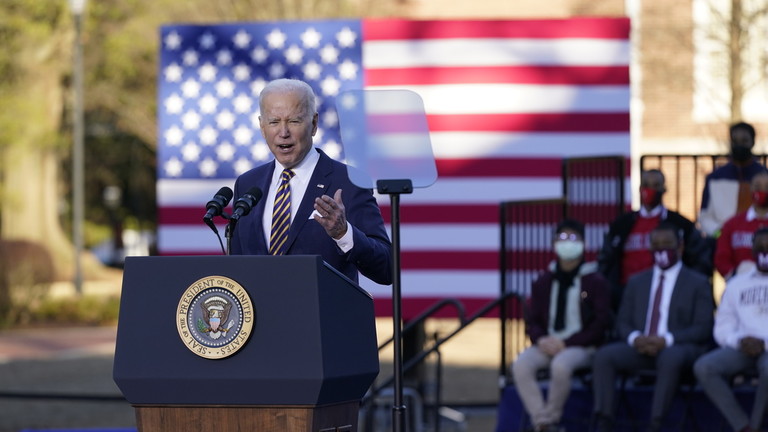 US President Joe Biden has called for the Senate to change the rule requiring 60 votes to move a bill forward, saying it was the only way to pass the two Democrat initiatives federalizing elections and ensure “majority rule.”

Speaking in Atlanta, Georgia on Tuesday, Biden declared “this is the moment to decide to defend our elections, to defend our democracy.” He said he’d been having “quiet conversations” about the change with members of Congress over the past two months.

“I’m tired of being quiet,” Biden said, raising his voice. “Today, I’m making it clear. To protect our democracy, I support changing the Senate rules whichever way they need to be changed, to prevent a minority of senators from blocking actions on voting rights.”

“The majority should rule in the US Senate,” he added.

While Democrats have a nine-vote majority in the House of Representatives, the Senate is split 50-50, with Vice President Kamala Harris acting as the tie-breaker. While this 51-vote majority has been used to approve Biden’s nominations, the long-standing filibuster rule requiring at least 60 votes to pass bills stands in the way of the Freedom to Vote Act and the John Lewis Voting Rights Advancement Act.

Both have been proposed by Democrats as a way of imposing a federal standard on US elections in response to what they called “voter suppression” bills passed by Republican state legislatures after the controversial 2020 vote.

Repeating that accusation on Tuesday, Biden argued that “history has never been kind to those who sided with voter suppression over voter rights,” and compared anyone opposed to the bills to racists and segregationists.

Though Biden had spent 36 years in the Senate and repeatedly defended the filibuster when Democrats were in the minority, on Tuesday, he argued that “the threat to our democracy is so grave that we must find a way to pass these voting rights bills.”

Last week, on the anniversary of the January 6 Capitol riot, Biden called the 2020 election “the greatest demonstration of democracy in the history of this country.” Officially, Biden won the highest number of votes in US history.

His predecessor, Donald Trump, has claimed that the vote in several states – including Georgia – had been “rigged” and riddled with irregularities, pointing to things such as widespread mail-in voting introduced on account of the Covid-19 pandemic.

Amid the controversy over Georgia’s presidential vote totals, Democrats won both runoff elections for the state’s Senate seats. While the state’s Republican government rejected Trump’s complaints about the vote, it also passed a “voting integrity” law last March, addressing some of the former president’s objections. A number of other GOP-run states followed suit.

Last summer, Biden called these state laws an “assault” on America and democracy itself. In June, his DOJ sued Georgia, alleging the law had a racist intent to somehow “suppress” the black vote and thereby hurt Democrats.

The refusal of two prominent Senate Democrats – Joe Manchin of West Virginia and Kyrsten Sinema of Arizona – to break the filibuster has already derailed Biden’s ‘Build Back Better’ economic agenda. Senate Majority Leader Chuck Schumer (D-New York) has said the two election bills could come up for a vote as early as Wednesday.