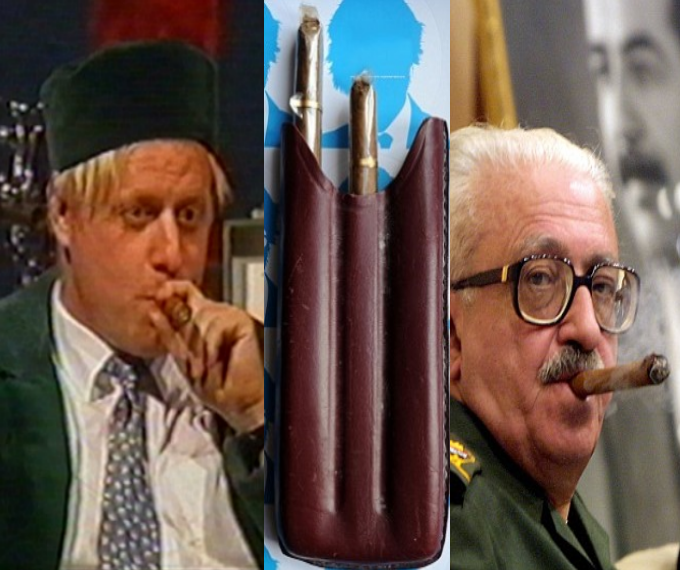 The Metropolitan Police today confirmed that they are investigating what has been termed the “partygate” culture at No 10 Downing Street, and Whitehall. Dame Cressida Dick announced today the criteria behind her decision, and the civil servant Sue Gray will now give way to the police prior to publishing her report.

Storm clouds are hovering over Boris Johnson which may well lead to his resignation or removal from office.

It is not the first time, however, that the police have investigated British Prime Minister Boris Johnson.

In 2008, the then London Mayor was fuming over an incident that happened in 2003, leading to a police inquiry over allegations of theft facing Johnson. The police accused Johnson of looting the home of Former Iraqi Deputy Prime Minister, Tariq Aziz, and stealing a cigar case.

In 2003, Johnson, then a member of Parliament for Henley, travelled to Baghdad and wrote about his experiences in the Spectator Magazine.

Years later, in June 2008, he handed over the cigar case to the police and wrote a piece in the Tory Paper, ‘The Telegraph’ about how petty the police were and blaming the ruling Labour Party.

The police also issued a statement confirming the cigar case had been taken into “police custody” whilst further inquiries were made.

Johnson though said, the investigation was open after political rivalry raised the issue with police and he accused the Labour Party of being “petty” and “idiotic.”

The cigar case was made of leather and could hold three cigars. Tariq Aziz was often seen with it at the Geneva Peace Talks during the first Iraqi conflict. During the period Boris Johnson said, “none of the major players is going to be arraigned for the Iraq disaster and the long arm of the law is instead reaching out – incredibly – for me.”

Stephen Pound MP, for Labour quickly replied that “what he has done is not to deny he committed the crime but has blamed the person who brought it to the attention of the police.”

The problem though was that he had brought this trouble on himself. On 26 May 2004 in Parliament, Johnson said, “I have to make a confession. The Hon. Member for Sheffield, Hallam, spoke eloquently and said we must all be careful to avoid falling into the trap. I have a slightly guilty conscience because I have in my pocket a cultural artifact of potential cultural, and historical importance, which I shall produce for the benefit of Hon. Members. It is Tariq Aziz’s cigar case, which I liberated from the House of the Former Iraqi Foreign Minister a few days after the war…….”

Johnson was quickly followed by his own colleague, the then opposition Deputy Chief Whip Robert Smith, “It is dangerous to say looting is acceptable as long as it is transparent.”

The police quietly dropped the investigation and Boris Johnson went on to be elected to become MP for Uxbridge, on 7 May 2015.

New revelations have now come to light as to how the investigation into Boris Johnson in 2008 was dropped.

Controversial lawyer Giovanni Di Stefano confirmed that towards the last week in February 2008, he received a call from an unidentified person asking on behalf of the London Mayor if he was the lawyer for Tariq Aziz. “I told him I was, and the man said, a lady would call me back,” said Di Stefano. 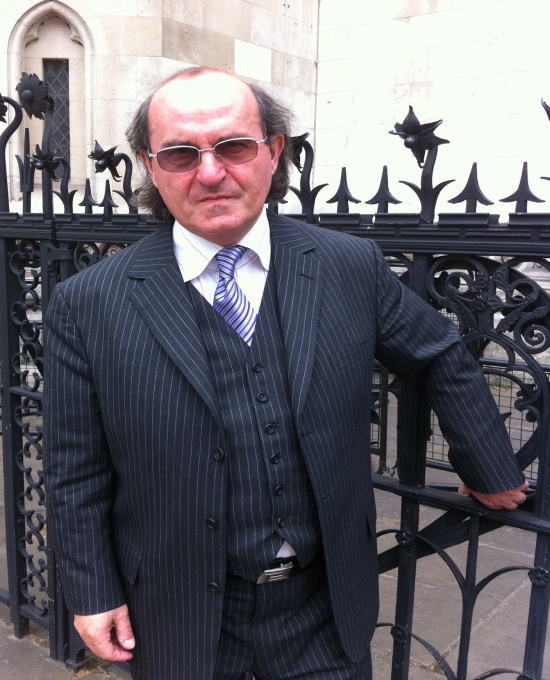 The Lawyer further stated that a lady called back almost immediately and told him that the Labour Government were trying to discredit any MP who had opposed the Iraq War and Johnson was facing a police prosecution over a cigar case that Johnson took in 2003, and that the prosecution was politically motivated.

Di Stefano said that the lady asked him to help Johnson but to “put it in writing saying that you heard the case from someone and perhaps Mr. Aziz can say he gives it or something.” Emails now published exclusively show that on 27 February 2008 at 21.36 Di Stefano did indeed follow instructions set out.

On 5 March 2008 at 14.47 from the parliamentary email of Boris Johnson the MP asked to speak to Di Stefano.

“I did speak to Boris Johnson and Crosby, and Boris explained his position he was in some sort of campaign and that the forces within the Labour Party, and some in his own party, wanted a conviction to prevent him from standing in any capacity ever again,” said di Stefano.

The lawyer then said Johnson told him that the future for the Tory Party was great, but this kind of bad publicity would detract votes.

“He asked for my help and even agreed to defray any expenses, and mentioned he remembered I had once made a substantial contribution to the Tory Party in the late 90s” explained Di Stefano.

Di Stefano further said that Johnson then sent him the details of the police officer handling the case on 5 March 2008 at 16.57. 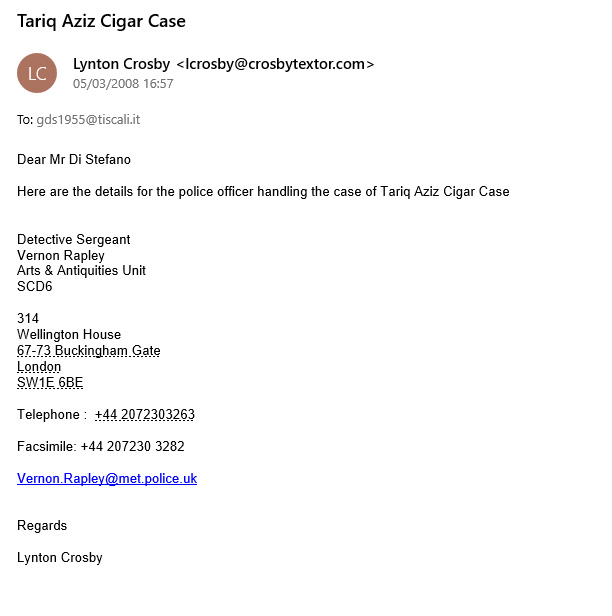 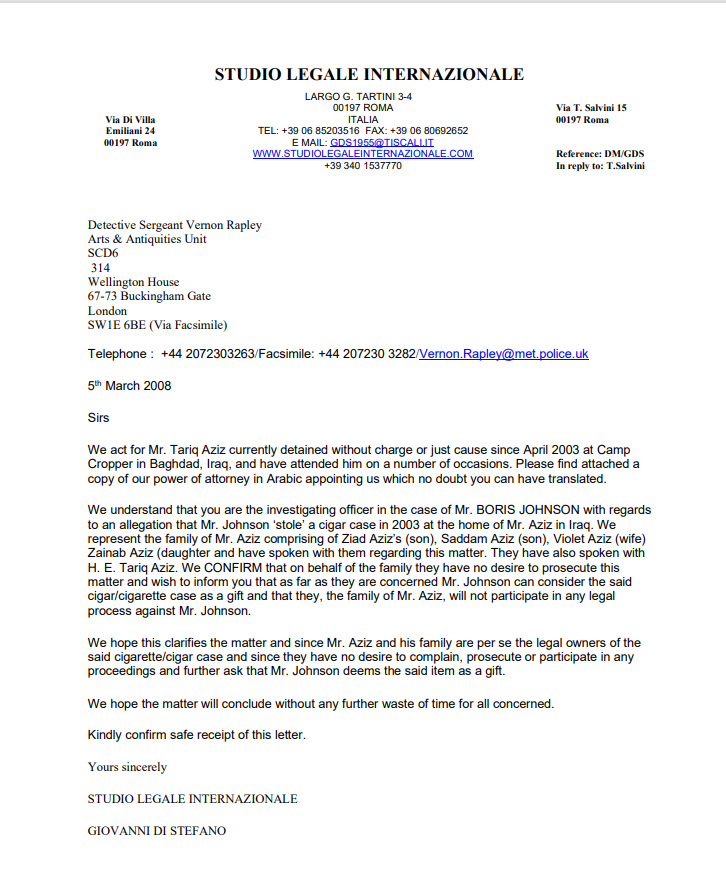 “I spoke to Johnson a second time and told him that I would write to Officer Vernon Rapley and explain that my client Tariq Aziz offered the case as a gift and would bring the matter to a close. This I did and received a reply back from the police at 18.13 same day,” said Di Stefano.

“Johnson told me he was truly grateful and to keep the matter quiet, and if he could ever help in any way, he would do his best. He told me he would get back into Parliament, eventually, and his very words were, “watch then what happens,” said Di Stefano.

The police dropped the matter because of the intervention of Di Stefano nicknamed the “Devil’s Advocate” and Boris became Mayor of London.

“Boris admitted taking the cigar case, but I confirmed Tariq Aziz would gift it to him but that only mitigated the offence, not expunged it,” said DI Stefano

Di Stefano confirmed he then had a lengthy conversation with the police saying, that no good would come of any further time-wasting.

The police did eventually cease the cigar case, dropped the investigation, and the prophecy of Di Stefano that Boris would reach the top came true

What lessons Boris Johnson learned from the bailout from the ‘Devil’s Advocate’ in 2008 is yet to be seen.

“This ‘partygate’ business could well be Boris Johnsons ‘Waterloo’ I do say, however, that if any Prime Minister should be in Wandsworth Prison it is not Johnson, but Tony Blair. He is probably the reason and my prosecution of him, why I am unlawfully detained,” said Di Stefano.