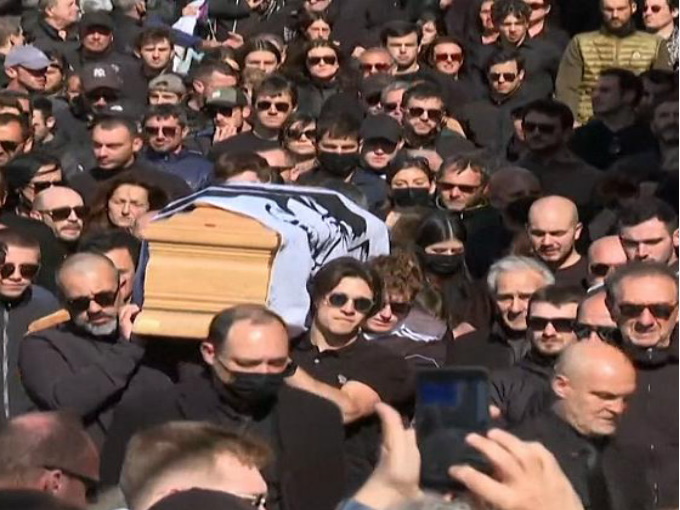 Hundreds of mourners turned out Friday for the funeral of a Corsican nationalist whose violent death in prison has turned him into a martyr for some despite his murder conviction.

Yvan Colonna, a former goat herder on the French Mediterranean island, was announced dead Monday after being strangled and attacked in prison on March 2.

The 61-year-old was serving a life sentence for the murder of a senior French official in 1998, but he is seen as a hero by some for his role in the violent struggle for independence for the island which lies less than 200 kilometres (120 miles) south of the mainland.

“He represents the fight for Corsica,” Ange Amati, who campaigned for his release, told AFP Friday ahead of the funeral. “We know Yvan, we know that nothing was proved, he was innocent in all of this.”

Colonna’s murder in prison by an Islamic extremist outraged many Corsicans and has galvanised the local pro-autonomy or nationalist movement, which has battled for decades for greater freedom or independence from Paris.

After several nights of rioting in early March, the government made a surprise offer of talks about increasing the island’s autonomy in a move welcomed by the dominant political group on the island, Femu a Corsica.

But public displays of support for Colonna, including the lowering of flags on the regional government building Tuesday and vigils attended by thousands, have created unease on the mainland where Colonna is remembered simply as the killer of local prefect Claude Erignac.

The decision to lower the flag in tribute was “a sort of insult to the Erignac family, the French state and the representatives of the state,” Interior Minister Gerald Darmanin said Thursday.

Colonna’s funeral took place in his ancestral home in Cargese, a village on the rugged western coast of the island, which is famed for its mountains and pristine coastline, as well as its role as the birthplace of Napoleon.

Hundreds of well-wishers walked behind his casket as it was brought to a local church, with the pro-autonomy leader of the Corsican regional council, Gilles Simeoni, and the suspected former head of the violent pro-independence militant group FLNC, Charles Pieri, also in attendance.

Simeoni called for flags to be lowered again and suggested a minute of silence during the afternoon.

A banner reading “Killer French State” was also unfurled in the centre of Cargese, reflecting anger over how Colonna had been attacked while behind bars and repeated refusals by prison authorities to transfer him to a jail in Corsica.

An estimated 4,000 people had lined the streets Wednesday evening after his body arrived by plane in the nearby city of Ajaccio, many burning flares and flying the black-and-white Corsican flag.

Despite his insistence he was innocent and the campaign to free him, Colonna was tried and convicted three times for murdering Erignac by shooting him in the head at point-blank range as he headed to a theatre performance with his wife.

He went on the run after the killing before being arrested four years later when police tracked him down to a remote mountainous area in the island’s south.

The killing of Erignac was the most shocking of around 4,500 attacks carried out by the National Liberation Front of Corsica (FLNC) from the 1970s until the end of its armed struggle in 2014.

The group warned after the attack on Colonna that it could resume its fight if Paris remained in a state of “contemptuous denial”.

“The death in the way it happened, in prison, for Yvan Colonna was an offence,” Socialist Party leader Olivier Faure told RTL radio Thursday.

“But to make him into a hero, to give the impression that he is a model for the young generations, is a scandal,” he said.