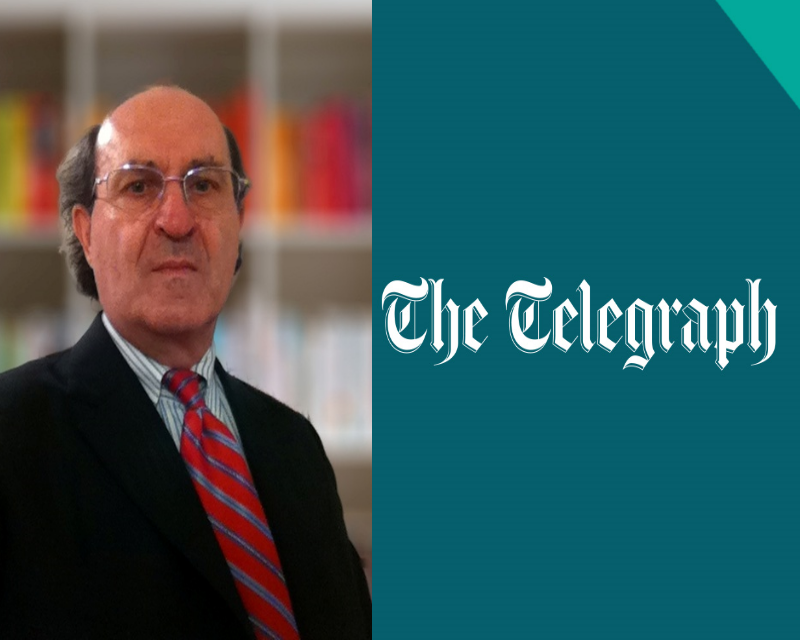 The controversial lawyer Giovanni Di Stefano who was recently the subject of a three-hour documentary by Sky, has issued a ten-million-pound Claim for Defamation against the Sunday Telegraph Magazine. The subject of the Claim was the reporting by the magazine that four of the lawyers’ children had a mother other than the ‘real’ mother on the children’s birth certificate. 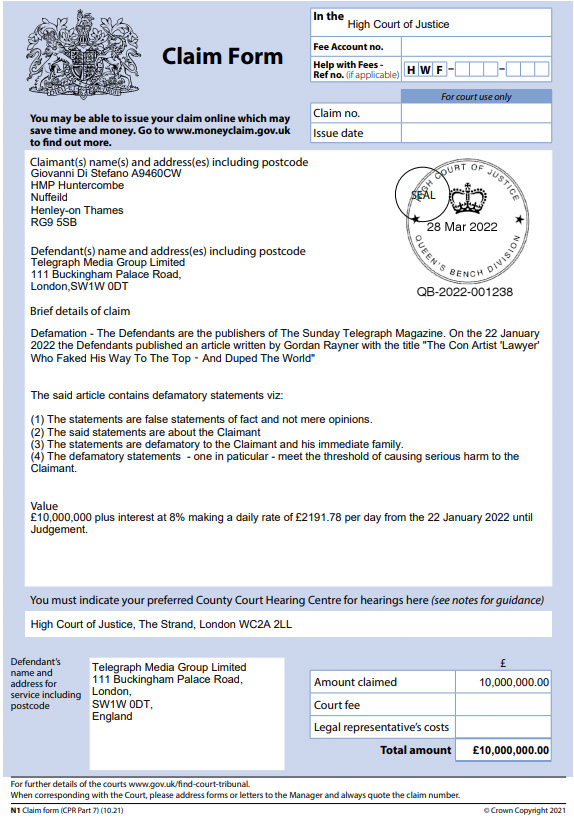 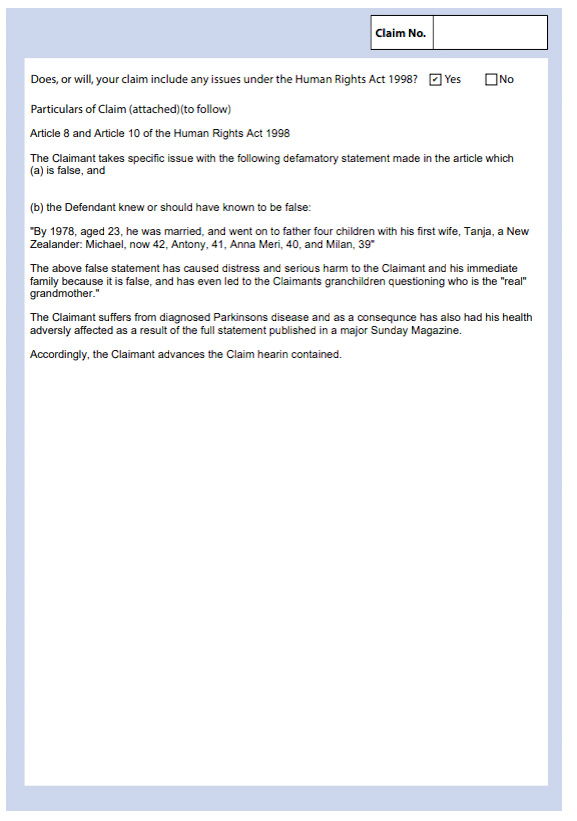 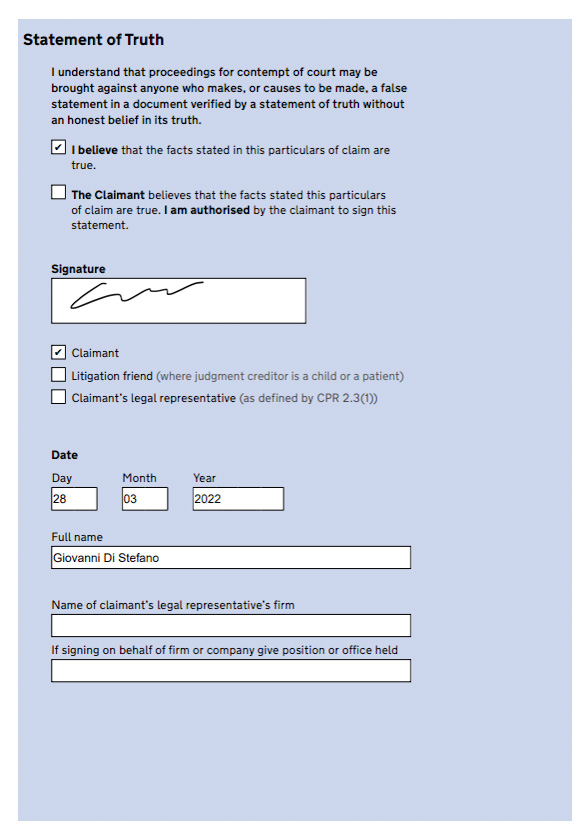 “Checking the mother and father of anyone in this jurisdiction is the easiest task in the world as all data is public,” said Di Stefano from Huntercombe Palace, where he is awaiting a return to Italy and Monaco.

Recently, the lawyer made a statement on social media warning the press that he did not care whatever was written about him, but if any media made any false statements about his family they would face “all the forces of the law in as many jurisdictions as publication.” 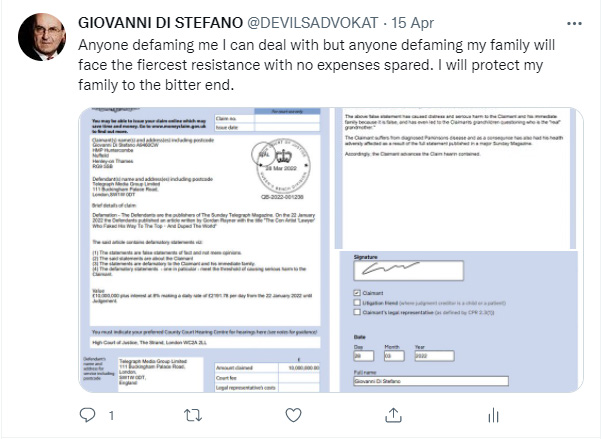 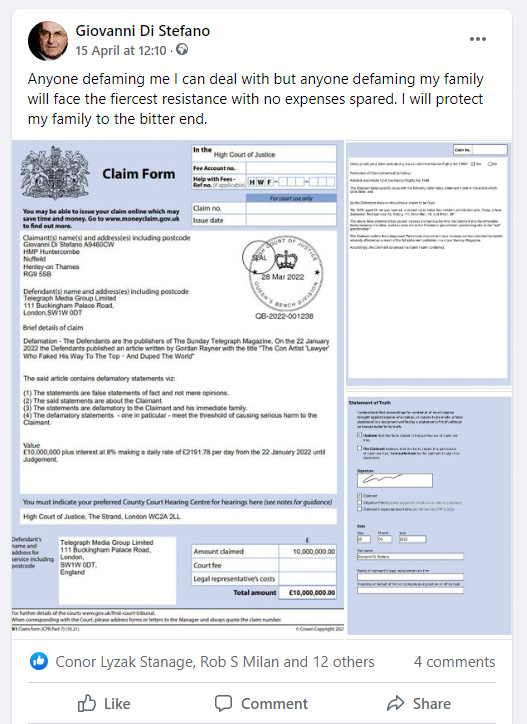 Giovanni di Stefano dubbed the ‘Real’ Devil’s Advocate for his defence of dictators and serious targeted alleged criminals was convicted at Southwark Crown Court in 2013, in what many legal analysts have now termed as a “political persecution disguised as a prosecution,” and jailed for 14 years. That sentence recently attracted commentary from many leading Queens Counsel as “nothing short of absurd and out of touch with the principles of sentencing.”

In the Claim against The Telegraph, the lawyer stated: “that his children have been mocked by people about who actually is their ‘real’ mother.”

There may be a time comes when all stories in the press will be under penalty of perjury or with a statement of truth, which I know will mean that some newspapers will only be able to publish maybe a single page,” said Di Stefano

The Defamation Act 2013 makes anything published that is false as opposed to opinion actionable if serious harm is or likely to be shown.

Di Stefano said: “that he had written to the magazine inviting them to correct the false statement in their online edition and to compensate his children for damages caused.”

“The arrogance of not even receiving an acknowledgement is typical of a government supporting media outlet who believes the law does not apply to them. So, I said to myself the only way I can protect my family is by the rule of law,” said Di Stefano

“I told the Telegraph to write what they want about me, but if they cannot even research a simple fact as to who the mother of my children is, what does that say about the rest of the article?” Di Stefano added.

R.F.V. Heuston an expert on the law of Torts described Defamation as one, “which has a tendency to injure the reputation of the person to whom it refers.

“Can you imagine anything worse than your children reading in what is deemed a reputable paper that their mother is not their real mother? That is direct harm to me, my children, and grandchildren, and the rule of law must apply. If I took no action, what kind of father would I be?” stated the Real Devil’s Advocate.

No one at the Telegraph was prepared to comment

The Court of Appeal are currently reviewing the lawyer’s conviction. 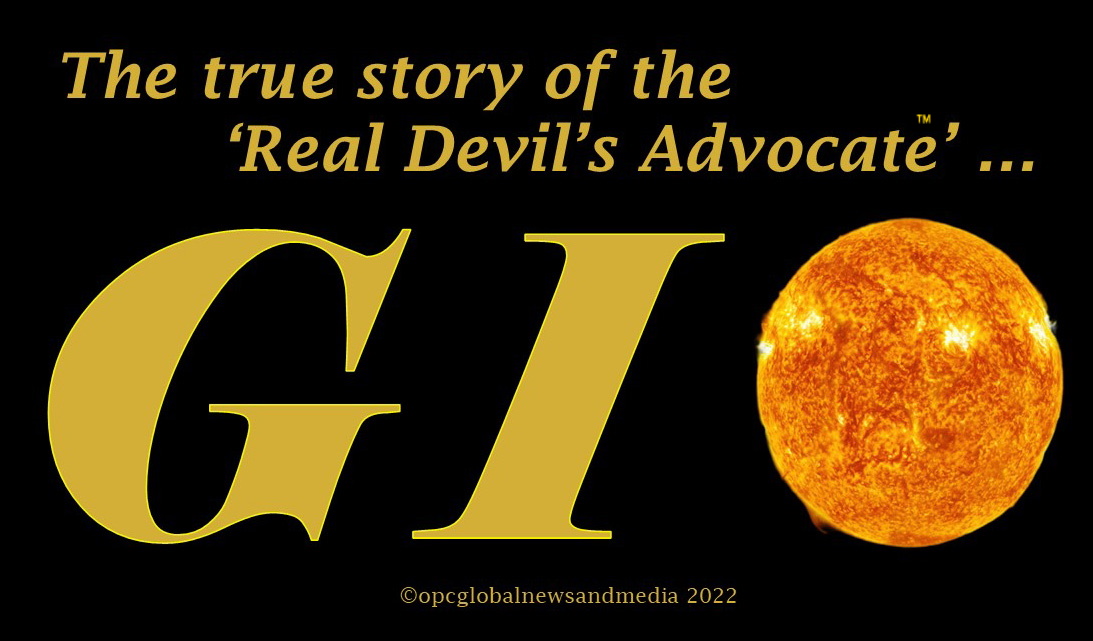