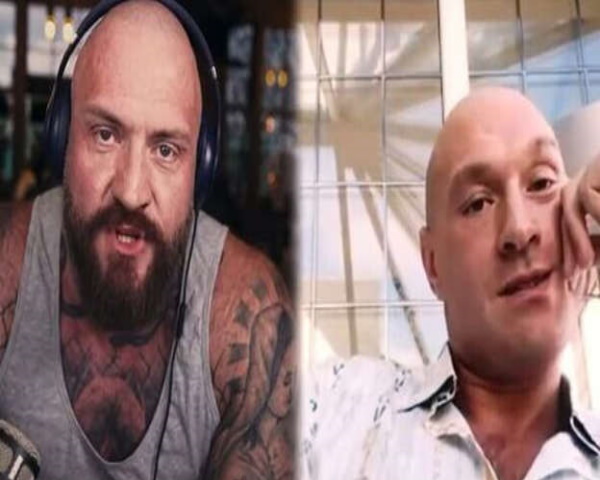 Tyson Fury launched a furious X-rated tirade at the True Geordie after he was grilled by the Youtuber about his upcoming bout against Derek Chisora. The Gypsy King did not take kindly to suggestions the fight would be a ‘mismatch’, calling the podcaster a ‘t***pot’ and telling him to ‘kiss his b****’.

Fury will fight Chisora for the third time in December at the Tottenham Hotspur Stadium despite beating his fellow Brit twice before. The 34-year-old was widely tipped to face Anthony Joshua, with the duo’s camps locked in talks over about for weeks before negotiations eventually fell through.

The fight has come in for some criticism with many believing that Fury has not given himself a big enough challenge in choosing Chisora as his opponent. He won both of their previous bouts comfortably in 2011 and 2014 with many expecting a similar result this time around. The reigning world champion is yet to lose in 32 fights, while the 38-year-old has lost three of his last four as he approaches the end of his career.

The criticisms were put to Fury by the True Geordie, real name Brian Davis, as the Youtuber interviewed him about the December bout. The exchange descended into insults being directed the 35-year-old way, with the boxer clearly unhappy about the line of questioning.

“What I’m seeing is this with his record right now, I don’t think he should be getting a world title fight,” the True Geordie said. “I think there’s a potential in boxing for people to get badly hurt when they’re mismatched. And I think that this is a mismatch.”

Fury responded: “I don’t I think the heavyweight fights or anything can happen off because you’re only one punch away.”

The Youtuber looked like he was starting to back down as he tried to wind up the interview and talk up the potential over Fury being defeated.

“If Chisora does it I think the world would be happy for him even you’d be the one on the receiving end of it,” he said. “Big thanks for taking the interview Tyson I understand where you’re coming from. Appreciate you and Derek are legends of British boxing, all respect in that sense. And I wish you the best of luck. Cheers mate.”

The True Geordie was in fits of laughter while this was ongoing and took the opportunity to laugh at the world champion as he struggled to end the call.

“Have you worked out how to close this phone?” he asked. “Are you alright?”

Fury simply told him to “suck a d***,” before finally working out how to close the phone. The camera then switched to a close-up of the presenter who sarcastically exclaimed: “That went well! Very glad I did this one on a video call because that could’ve been a very painful end to my life.”

Fury will now properly start his preparation for the December bout as Chisora looks to claim one of the biggest shocks in boxing history.